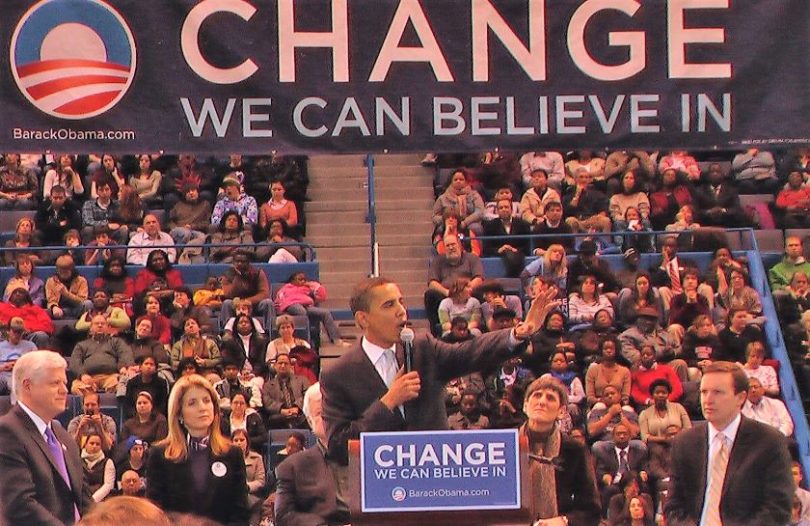 HARTFORD, Connecticut, U.S.A. — If his resonating smile, catchy name, and loyal followers are any indication, Barack Obama could well find himself in the White House next year.
Democratic presidential hopeful Barack Obama, speaking in Hartford, with U.S. Sen. Ted Kennedy to his left.
Obama told a relatively young, but racially diverse crowd night at Hartford’s XL Center, “I’m tired of the politics of fear. I want to bring the politics of hope.”
Obama cited dwindling education, costly healthcare, rising gas prices and the War on Terror as the main challenges the country is currently facing. 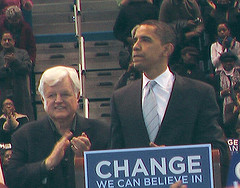 “In the face of such challenges, we can’t afford to wait,” said Obama, a senator from Illinois who is dueling with New York Senator Hillary Clinton for the Democratic Party’s presidential nomination.
The crowd quickly echoed Obama’s sentiments, chanting “We can’t wait.”
Despite his optimism for the country’s future, Obama is nothing if not realistic.
“I was convinced the American people didn’t want spin; they didn’t want P.R. They want straight talk,” he said. And that is exactly what he delivered to the masses: straight talk.
Among the policies Obama plans to administer should he be voted into office are healthcare for everyone and raising minimum wage every year as opposed to every ten years.
Obama vowed to end the war in Iraq, but to keep the country safe.
“I may be skinny, but I’m tough,” he said.
Admittedly, such changes cannot be carried out by one man alone.
The public’s support is crucial in Obama’s mission to bring hope to America and lead the country in a new direction.
According to Senator Ted Kennedy of Massachusetts, who introduced Obama, “This election is now in your hands.”
The Obama supporters gathered in Hartford seemed to come from all walks of life and the vast majority mirrored Obama’s enthusiasm for change.
Democratic presidential hopeful Barack Obama greets Congressman Chris Murphy in Hartford. 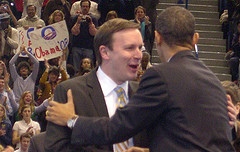 Obama, a gifted public speaker, made sure Monday night to speak to the entire crowd in the arena, never turning his back to one group of people for too long.
In addition to Ted and Caroline Kennedy, the daughter of former President John F. Kennedy, Connecticut congressmen John Larson, Chris Murphy and Rosa DeLauro showed up to support Obama.
Murphy, who is the congressmen for Connecticut’s 5th district, wholeheartedly pledged his support for Obama, saying “a candidate like Barack Obama comes once in a generation.”
Murphy, who said Connecticut “is hungry for change,” said he considered Obama to be a unique leader who makes politics worthwhile. He also noted that Obama’s popularity with younger audiences will help to bring millions of young people back to the polls.
While it is not certain whether or not Obama’s name will end up on the ballot in November, the crowed roared when Ted Kennedy summed it up.
“I’ve got good news for Connecticut,” Kennedy said. “Just think, one year from today George Bush will no longer be President.”

Beth Pond is a Reporter for Youth Journalism International. The photographs were taken by YJI’s Wesley Saxena and Kiernan Majerus-Collins.