HARTFORD, Connecticut, U.S.A. — The many young people across the globe who are shoved into piano lessons may recognize the obsessed parents and terrorizing teachers portrayed with humor in “2 Pianos 4 Hands” in a recent traveling production at The Hartford Stage. 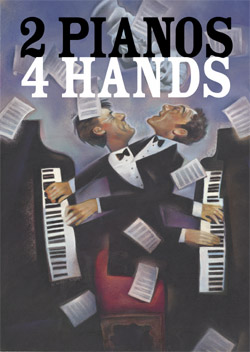 The play, which got its start in Toronto in 1996, features two stunning grand pianos facing each other on a bare stage. Seated at them are two actors – Ted Dykstra and Richard Greenblatt – who rotate between playing students and instructors.

The script features two hours of slapstick and classical music, which don’t usually mix.
Right from the start, when the two pianists start plunking on their pianos but stop repeatedly to adjust their benches, the audience is laughing out loud.
And the laughs keep coming.
In the second act, for example, a spinning, shimmering disco ball is suddenly lowered and as the lights swirl around the theater, the actor dances about like a banshee.
In the background of the stage are two large shadow screens that often change into a rainbow of colors as the pianos are played.

In a creative use of the screens, the two piano prodigies are reprimanded by shadowy figures of parents golfing or mothers scolding to keep their bums planted on the piano bench and practice for hours.
The actors, portraying young prodigies, keep coming up with excuses to scoot away and relieve their fatigued fingers.
At times the musical interludes in the show can get lengthy. They’d be better suited for a traditional piano concert.
And parts of the slapstick can get tiring, too.
But if you’re ready for a new way of looking at the drudgery of piano practice, it’s worth catching this entertaining production.