WEST HARTFORD, Connecticut, U.S.A. – Composition Professor Robert Carl of the Hartt School at the University of Hartford, came to writing music late in the game.
“I started playing piano towards the end of high school,” Carl said. “I play piano, but I’m not a great performer.”
In fact, Carl didn’t major in composition when he studied at Yale, but in American history. 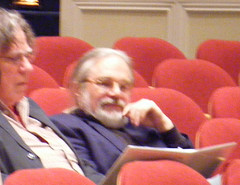 But during Carl’s sophomore and junior year, Yale was celebrating the 100th birthday of Charles Ives – who many say was America’s greatest classical composer.
Around campus, musicians at Yale performed works written by Ives.
“I went to these concerts and I heard this amazing music and I sort of flipped out,” Carl said.
It inspired Carl to write his own music.
“Ives is sort of a can-do guy,” Carl said. “By the time I graduated, I had written an orchestral piece.”
Last spring, the Nutmeg Symphony Orchestra premiered “A Matter of Scale,” one of Carl’s works.
“It’s an old piece actually, which really has not been performed in public before,” Carl said.
Carl wrote it more than 15 years ago at a summer artist’s colony in France. He said it was written to help teach conducting.
“They wanted a piece for all these conductors to conduct as part of the learning process,” Carl said. “I wrote it for that occasion.”
Carl said that the piece never really got a real premiere, and was somewhat forgotten as he quickly moved on to other work.
“A Matter of Scale” is “a memorial,” Carl said, to Stephen Albert, a composer he knew and admired who died young in a tragic accident.
“He wrote very Romantic music,” said Carl, referring to the Romantic time period in classical music history.
“The winter after that summer, he died in a car crash on Cape Cod,” Carl said. He said Albert’s death taught him that “someone could be there one day and gone the next.”