NEW YORK CITY – Where else but in New York can you join a crowd of thousands, gaze up at massive balloons passing by and shout holiday greetings in unison with strangers across the street?
It’s a tradition in my family to travel to New York City to meet up with aunts, uncles and cousins to enjoy the Macy’s Thanksgiving Day Parade in person.
This was my third time seeing the parade in New York, and every time it’s just as exciting. 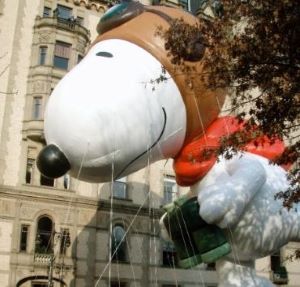 Snoopy sails along the streets of Manhattan during the annual Macy’s Thanksgiving Day Parade. (Kathryn Middleton/YJI)

The annual Thanksgiving Day Parade, sponsored by Macy’s department store, is a huge event that’s famous for massive balloons, marching bands, celebrities, creative floats and more.
Tons of people fill the streets of Manhattan for this exciting holiday occasion, so it isn’t easy to get a memorable seat or view of the parade.
There are two options.
You can wake up ridiculously early, or you can pay for seats. Even if you buy your seats, you still have to wake up early – just not that early.
This year, my cousins and I walked with our families across Central Park at 7:30 a.m. (which is not very early) to get to our seats.
Yes, we were lazy and chose to buy our seats. By the time we got to our seats, we waited with anticipation for the parade.
It didn’t disappoint us.
Even though the parade is shown live on television every year, it’s not as exciting as actually being there, taking it all in and not missing a thing.
It’s great tilting your head back to see these huge balloons. Just as you’re seeing Snoopy’s legs go away, you see SpongeBob’s big eyes heading your way.
And in between the performing groups marching past, there are the crowd cheers.
One side of the street is yelling, “Happy!” and the other side of the street yells back, “Thanksgiving!”
Even New Yorkers who aren’t on the streets are part of this scene.
Gazing up at the apartments across the street, I could see everyone looking out their window, watching the parade.

Kathryn Middleton is a Junior Reporter for Youth Journalism International.