By Chi Le
Junior
Reporter
Youth Journalism International
HANOI,
Vietnam – “What are your chances? What are your odds?” says one character to
another.
“I don’t
know, man. I mean I looked it up and it said 50/50 but that’s like the Internet
so…” 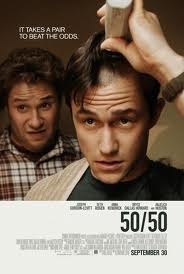 That’s a little
prelude to the movie title that may send you to bewilderment – though only for
a little while. 50/50, released in
2011, is a comedy-drama film on the topic of cancer survival directed by
Jonathan Levine.
Funny as it
seems, a keen cinema-goer cannot truly acknowledge his “authority” without
listing at least one movie shedding light over the subject of “cancer.” But
even the keenest, I believe, cannot overlook 50/50 for its novel approaches to the seemingly old chestnut.
The movie
centers on the story of Adam Lerner, a 27-year-old radio programmer played by
Joseph Gordon-Levitt. Adam’s life is significantly changed by the unforeseen diagnosis
of a spinal tumor. His best friend, Kyle, played by Seth Rogen, conceitedly
showcases a not-necessarily-valuable resource of dating advice. Also, he lives
away from an overbearing mom, Diane, played by Anjelica Huston, who now devotes
full care and attention to her husband, who is debilitated by Alzheimer’s
disease.
On his
relationship status, Adam has a girlfriend, an aspiring painter named Rachael,
played by Bryce Dallas Howard. Their bond does not last long, though, as the
viewers can soon pick up the harbingers of a breakup. In addition, as the movie
wears on, Adam is loath to receive assistance from the dedicated psychiatrist
Katherine, played by Anna Kendrick, to alleviate the cancer treatment’s load on
him.
Generally
speaking, the gist is simple: a fine young man finds out he has a malignant
tumor; he subsequently endures shock, pain and anger before he learns the right
way to win the battle. However, it is extremely hard to call the plot clichéd
for all the details that more or less reflect the real experience of a cancer
patient.
The
screenwriter, Will Reiser, having had a close call with cancer himself, knows
exactly which specific aspects of story to convey and how to accomplish it. Viewers
are led into the world where people greet each other with their names and their
medical states. They are shown an actual conflict of emotions that people with
cancer must go through before they pick up the pieces and fight against death.
More notable,
Reiser does not forget to add a tinge of eccentricity to the lead character, stirring
up the solemn atmosphere pertaining to almost every movie of the same subject.
Together
with an authentic screenplay, right camera angles help usher the audience into
a third-person position perfectly. The camera follows Adam from the moment he
embarks on the harshest time of his life; occasionally, it bounces back and
lifts up to give a broader view of the overall scenario. Moreover, director Jonathan
Levine gradually reveals each and every state of the story so that viewers can
always maintain a sense of breathing and living with the characters.
Gordon-Levitt
seems tailored to play the lead role. Through genuine, and not at all monotonous
expressions, Adam’s inner feelings are laid bare for the audience to sympathize
and identify with. Not only does he become the character and the character’s personal
story is his, he turns it partly into ours as well.
It is
interesting to note that Gordon-Levitt has already made a name for himself
after the highly acclaimed performance alongside Zooey Deschanel in (500) Days of Summer. Nonetheless, only
with 50/50 is he officially hailed as
the “It boy” of independent movies – and he definitely lives up to the title.
Another role
worth discussing is Rogen’s portrayal of Kyle. As Adam’s best friend, his
actions occasionally come across as inappropriate, if not unacceptably
apathetic. Kyle’s jokes, which I believe to be the key component in this
so-called comedy, indicate a reprehensible lack of empathy. Much as I respect
Rogen’s talent together with his instrumental role in the drafting of the movie’s
brilliant script, his character just easily becomes the most fictionalized of
all, leaving the audience with nothing more astounding than the idea of using
cancer as a pick-up line.
Having been
critically applauded after her outstanding performance in the 2009 dramedy Up In The Air, the role of Katherine proves to be not much of a challenge to the talented Kendrick. Though the
script in general does not allow much space for Kendrick’s intricate emotional
expressions, her performance offers something extra that makes the movie more
perfect as a whole.
Without a
doubt, 50/50 deserves a spot in the
list of 2011’s top 10 independent movies. Even though it may not reach the bar that
Oscar-winners like The Descendants or
The Artist have set, 50/50 is always a rewarding experience for
anyone who maintains firm belief in movies’ ability to convey pure emotions.
After all, with
Gordon-Levitt shaving off his hair in the poster, you know it will somehow
exceed your expectations.