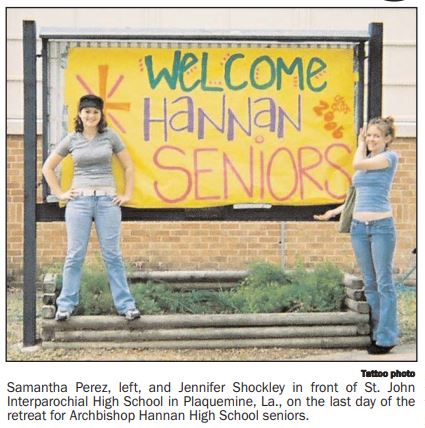 Wednesday, Dec. 7, 11:46 p.m. , Ponchatoula , Louisiana — My old school, Archbishop Hannan High School , held a retreat for my senior class this past weekend. It had been originally scheduled for the weekend Katrina came and hit, but, well, that didn’t happen. We all saw it as a class get-together now, a chance to see each other and give Walgreens a lot of money for developing pictures after.

Jenn, my best friend from Hannan, and I were extremely excited. The entire week before, we were sending text messages to each other, counting down how many days we had left. On Friday, I packed but started feeling sick that afternoon. My head started hurting, and I knew I was getting sick again. That didn’t matter. The retreat was so much more important than a cold. I threw a pair of clothes and a pair of pajamas into a duffel bag, and I loaded it, along with the sleeping bag we borrowed from my cousin, into the PT Cruiser.

Saturday morning, Mom and I met Jenn at the gas station near the camper and picked her up to take her with us. She brought gifts of greeting: doughnuts from inside the gas station. We snacked and talked the entire way there. She told stories of her new school that she hates, and I realized how much I miss having her in class with me. We’ve been best friends since the very beginning of freshman year. Now, days after the retreat, I feel sort of lost.

On the interstate, we made a sort of refugee caravan with some other Hannan cars carrying seniors to the retreat. I took a picture of us all when we stopped at a gas station to pick up another car in the train. Jenn and I laughed because it reminded us of the wagons heading to Oregon.

The retreat started at 9 that morning, and we made it on time. For about an hour an a half, my class started filtering in. Some people cried, but mostly, there was a lot of shouting and screaming. I sat on a table near the entrance with Jenn and Leanne, who was already there.

It was so great to see everyone, people and friends that I never thought I would really get to spend time with again. Jenn and I didn’t leave each other’s side, and I realized what an amazing friend she really is. We started taking pictures then, and by the end of the retreat, we had combined disposable cameras. We finished four of them by the time we left Sunday afternoon.

The retreat was wonderful, and thinking about it now makes me smile. My friends and I just sat and laughed, like we used to everyday back before the hurricane. Nothing’s really changed deep down. People look different, but none of us really act any differently than we did before. We have more worries inside, I guess, but everyone does right now. We’re growing up. The slow, gradual process of aging and maturing was set into motion at full speed by the hurricane.

We’re all growing up too soon.

Saturday night, much after all the parents had left and the initial greetings had ended, the retreat leaders herded us to the church nearby. Jenn, our friend Brent, and I sat together, and as people filed to the back to go to confession, Jenn and I started having a serious talk about … everything. To be honest, I think I was the one who said it first, said that I missed her. She said she missed me too, and then we were crying. The two people probably least likely to cry over anything — there we were, crying in a church. Our friends turned and looked as we hugged each other, and they smiled because they knew. Jenn and I were never apart at Hannan, and I didn’t realize how much I missed my best friend.

We hung out that night with the old group, the old gang. We laughed the entire time, just making fun of everything. It’s amazing how much better things seem when you are laughing at them with your friends. The retreat leaders separated boys from girls a little past midnight , and Jenn, Leanne, and I set up our sleeping bags near the border of the gym, the line where the boys were separated from the girls. After everyone started settling down and Leanne fell asleep, Jenn and I had another serious talk about everything new in our lives. We talked for a long time, until both of us were too tired to stay awake. We fell asleep around 2:30 that morning.

Jenn was waking me up around 7:30 the next morning. See, she and I are strategists. We woke up Leanne and went to the bathroom before anyone else could wake up enough to function and find their clothes. We got dressed, then packed up our things. Jenn had to help me roll my sleeping bag because I had never used one before. She’s a spiffy friend.

That day, we ate breakfast together and went out to the playground nearby. We took some more pictures, but mostly we just talked and joked around with our wonderful friend Brent. When our parents started getting there, we all headed to the church for Mass together. Jenn, Brent, and I sat together in the back with Leanne. When Mass was over, they served us all lunch, an amazing jambalaya. Home cooking. We left a few hours after that, Jenn still with us.

We dropped her off with her dad at the gas station again, and we promised to get together soon, maybe this weekend if we can. If not, definitely the next. I miss her like crazy because she’s one of my best friends in the world, and even though I have friends at my new school, none of them are even close to being Jenn.

By the time I came home, I was already falling asleep. I had to cancel the plans I’d made with my friend that night because after I took my shower, I was dead on my feet. I fell fast asleep on the little sofa in my camper.

This week has been rough. I’ve been sick again because I’m allergic to everything here. Stress, deprivation of sleep, and allergies are beating my immune system down, and I left school today, too dizzy to stay. Outwardly, I’m handling this whole mess well, but I don’t remember ever getting sick so often, until now. Also, my hair comes out sometimes, another symptom of stress, my mom thinks. I don’t know, but I cut my hair short last week. Long hair isn’t made for camper life.

Just a minute ago, I made a list of things that I need to do. It’s long and serious, but it helped me to see my enemy on paper before me. Even though I know that getting the things on that list done won’t be any easier than before, it made it conquerable in my mind.

I’m taking a few courses at Southeastern Louisiana University next semester, earning some college credit before I graduate high school. Since the library where my mom worked will be hopefully heading towards opening again in January, I would need a ride to get from the college campus to St. Thomas Aquinas, where I’ll be taking PE and Religion.

We bought a car for me yesterday, my very first car. I’m excited about it! It’s so incredibly nice, and I don’t understand how we could spend the money to buy it, whether I needed it or not. We had always planned on getting me a car for my graduation, but things have been so hectic with the hurricane business.

It’s beautiful, and I love it. It’s a silver Mazda 3. 2006. It has the new car smell and when I turn the key and start the ignition, a little message comes onto the screen; my car tells me hello. I’m practical, though. I wanted a car to last me because heading around car lots makes me nervous. I wasn’t looking for something flashy. Dealing with different things in my life has made me practical. I wanted something small but spacey because I’ll be in college soon. I like sitting up high so that I can look down on the road. I want good gas mileage, and I need a car that will last. I hope we made the right choice, but I know that I love the car that’s sitting in the yard right now.

I also know that I’m lucky. After talking to Jenn and seeing my friends at the retreat, I know that I’m lucky for so many reasons. I can handle myself in a situation. I have parents who were able to buy me a wonderful car, and I am able to take courses at a college next semester. And, where other people are struggling to find something to depend on in their lives, I have writing. Writing won’t turn on me, and I’m lucky.

So, things have been okay, this week. Rough, but like everyone else, I’m dealing with it. I just need to tackle my list of things to do, and then make a new one to overcome. Like I said before, I’m just taking it day by day.

Read the next #FleeingKatrina entry here.