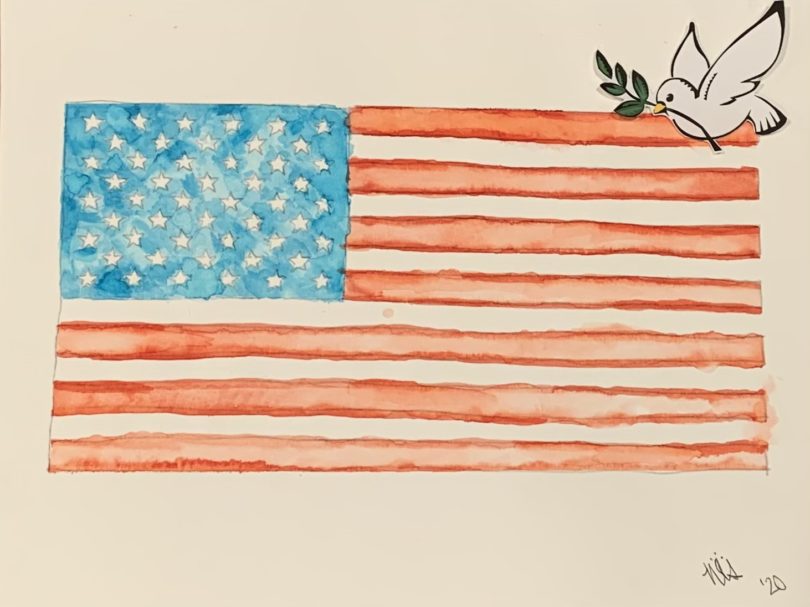 Pekin, Illinois, U.S.A. – Every year around the Fourth of July, I reflect on some pretty cool life experiences involving the U.S.A. Two always stand out in my mind.

They both start with silence.

It was a simple routine: “Would you please stand for the Pledge?”

As my voice boomed throughout my school, students stood to their feet and put their hands over their hearts and stared at a dusty, old flag hanging in the classroom.

Every school day at 7:49 a.m., I sat in my seat in the principal’s office waiting for the bell to ring. Then, when 7:50 a.m. finally arrived, my whole school had the “pleasure” of hearing my voice recite the Pledge of Allegiance.

At 7:51 a.m., I would simply walk to class, or sometimes run, depending on if we had a test that day.

It was a routine that had little meaning to me. Yet, it has all the meaning in the world.

Since kindergarten, U.S. students have been reciting the Pledge of Allegiance (or just “the Pledge”) as a daily ritual before school began. It was the same flag and the same words five days a week.

What could be so special about something so routine?

I remember being caught off guard one morning when I was saying the Pledge. Sure, we have all learned about the historic Francis Scott Key who wrote “The Star-Spangled Banner” and Betsy Ross, who is said to have created the first American flag, but those are just facts.

This is where history touches real life.

“…and to the republic for which it stands…”

These words that I spoke daily, other students from across the nation did so, too. The same words and the same routine is shared by all.

Our nation is filled with turmoil and division. But, during the 15 seconds that I, as well as all students around the U.S., recite the Pledge, we are at peace.

I like to imagine a dove holding an olive branch by the American flag.

Something so simple unites us all. Peace is acquired.

“…one nation under God…”

As each word of the Pledge flew out of my mouth, I felt humbled. Most of all, I am honored that my voice had the power to make that much of a difference.

“And now please stand for the national anthem sung today by Norah Springborn.”

With a pitch pipe ready to go, I quietly blew an E flat.

As the basketball players and cheerleaders took their places, I walked out to the middle of my school gymnasium with a microphone in my hand.

I looked around the gym and all eyes were on me. Each person waited for me to take my first breath and begin to sing.

I put my hand over my heart and stared at the huge American flag.

“O say can you see, by the dawn’s early light…”

I was in awe. That flag was directing my every note. I again visualized a dove holding an olive branch next to that flag.

Peace is acquired for those 55 seconds that I sing.

As each word of the anthem flew out of my mouth, I felt humbled once again. So many others around the U.S. have sung the same song with the same notes. What makes it so special? I felt honored to be able to share my voice and make a difference.

We take it all for granted.

From sea to shining sea, Happy Birthday, America! Let us never forget the power of the Pledge, the Anthem, and our patriotic pride.

“…indivisible, with liberty and justice for all.”

“O’er the land of the free and the home of the brave.”