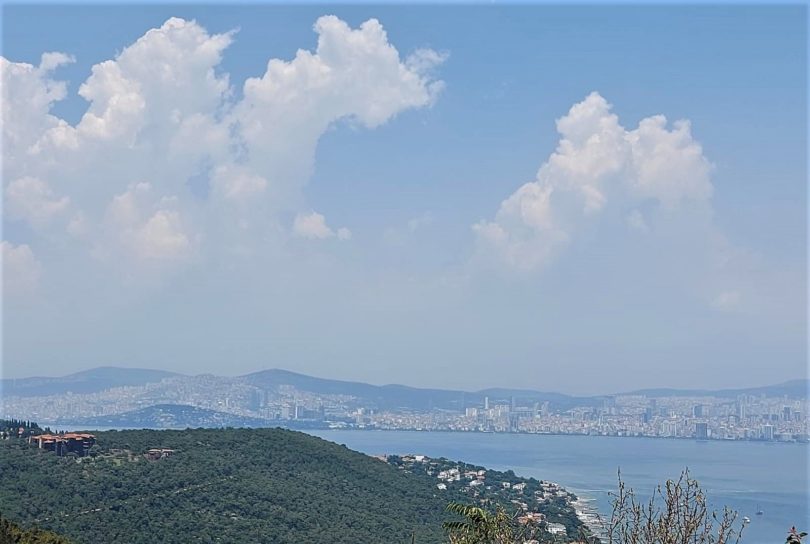 The view of Istanbul from Büyük Ada, Princes’ Island, Turkey. In the foreground on the left is the old Prinkipo Orphanage. (Lina Köksal/YJI)

We wanted to get away from the chaos of city life and the heavy crowd, to try and get back to having a normal life after being cooped up in the house for so long. But we were also going to celebrate my birthday, the way I like it – full of adventure and fresh air.

Istanbul was waking up after its long sleep due to the pandemic and I was excited to be socializing again.

We set off around 9, which was early for us since we had just started our summer holiday. We met in front of the port and boarded the ferry. With the coronavirus still a threat, most passengers opted for the outdoor seating so we happily took seats inside. We took turns going out and having some fresh air.

Once we arrived at the island we realized that we weren’t the only ones trying to escape from the city. It was full of tourists.

We were disappointed but we still didn’t allow it to dampen our mood. Luckily, we had a friend who knew the island well and he guided us and made sure we ended up in areas where there were fewer people.

Our first stop was to have breakfast, so we set off to the Bahçede Sinek Café. It’s an environmental based café, with organic food and sustainable materials. The thing I found most interesting was that they served our lemonade with metal straws instead of the cheaper plastic ones.

After our breakfast feast, we began walking uphill with full stomachs. Our destination was the historic Aya Yorgi Church. The original church was built in the mid-1700s, and is the top tourist destination on the island.

It is said that the church was named after a well known and loved Christian saint, Saint George (Aya Yorgos), who was called Aya Yorgi by the Greeks. Every year, crowds of people make a pilgrimage to the church on April 23. Some climb up the steep hill silently and barefoot, according to ritual. Some apparently even tie a string to a bush and unravel it all the way up to the top for good luck or for their wishes to come true.

The walk uphill was strenuous but totally worth it once we reached the top.  The view was breathtaking.

Sadly we weren’t allowed into the church since our shorts and crop tops didn’t meet the dress code. They boys, also wearing shorts, were admitted, though.

After taking in the view and resting our legs, we started walking towards the old Prinkipo Orphanage in the center of the island. Originally a hotel and casino, it is one of the largest wooden structures in the world and possibly the largest in Europe. It’s still beautiful today, even though it suffered damage from a fire.

Local legend says the fire broke out while was an orphanage for Greek children. According to the rumor a few kids died during this fire, one of them by falling into a well. This tragedy haunts the local people of the island, who say that sometimes the screams of these kids can be heard echoing in the ruins of the orphanage.

Running back to the ferry we all headed back to Istanbul to return to city life.

This magical island with its whiff of history and mesmerizing beauty allowed us to relax, learn a few things and make some memories together.

Lina Köksal is a Reporter with Youth Journalism International.

Lina Köksal is a Correspondent with Youth Journalism International from Istanbul, Turkiye.