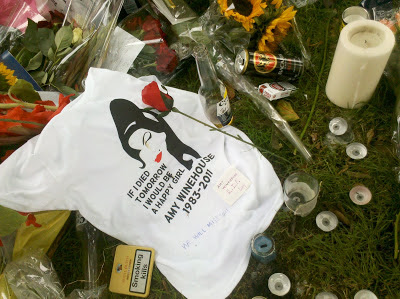 Sadly, we already know how the story ends.

The cause of death was later revealed to be accidental alcohol poisoning, and for Winehouse’s millions of fans across the world it felt almost like losing a member of the family.

As tributes flooded in, fans paid their respects in the only way they knew how – through music. By the end of the week, a record-breaking eight of Winehouse’s singles appeared simultaneously in the UK charts.

Winehouse lived her life in front of the camera, not only because she became world famous, but because her and her friends documented everything, long before anyone else had any interest in seeing it. Such is the personal nature of these films – fears, romances, fights – that watching feels almost voyeuristic.

As with Senna, his last documentary – an excellent biography of the Brazilian racing driver Ayrton Senna – Kapadia makes scant use of interviews with talking heads. They don’t appear on screen, only as audio on top of images of Winehouse herself taken from personal videos, performances and interviews.

The similarities between Senna and Winehouse are remarkable. They came from radically different places, and lived radically different lives, but were driven by the same burning love for their respective crafts that briefly, and excitingly, made them the best in the world at what they did. Both were hugely charismatic, beloved by millions and were tragically cut down in their prime.

Hauntingly, both seemed to predict their own deaths but were powerless to do anything about it. Winehouse was convinced she would die young. Many people close to her during the height of her career even say that she was exercised by deep fear that she would end up joining the “27 Club,” a moniker given to a group of artists such as Janis Joplin, Jimi Hendrix and Kurt Cobain who all died age 27. That group now includes Winehouse herself.

Her husband Blake Fielder-Civil, the inspiration for the song “Back to Black,” was a destructive influence who feared that if Winehouse kicked her drug habit he would lose his own supply. Despite this, and powerful criticism of the paparazzi, the film is honest enough to admit that Winehouse was complicit in her own addiction.When it comes to divvying up blame, Kapadia pulls no punches. Amy’s father Mitch Winehouse was a constant barrier to her getting the help she desperately needed because he refused to accept that anything was wrong – as documented by the line “if my daddy thinks I’m fine” from her most famous song “Rehab.”

One of the most painful moments in the film is when a clean Winehouse, shortly after winning a Grammy Award, turns to a friend to confess that success is “so boring without drugs.” More positively, her other addiction was to music and she was never happier than when she was singing and writing.

What shines through is not just her raw natural talent, but also her determined individual streak. As a down-to-earth North London Jewish girl who was obsessed with jazz, Winehouse realized there weren’t songs being written that reflected her own life, and so set out to write them herself.

In an era of prefabricated pop, it is remarkable how personal Amy’s two albums were. She took jazz, a sometimes rarified and elitist genre, and made it gritty, real and about herself. Her work is a fitting soundtrack to her life story, and Kapadia’s film a fitting tribute.