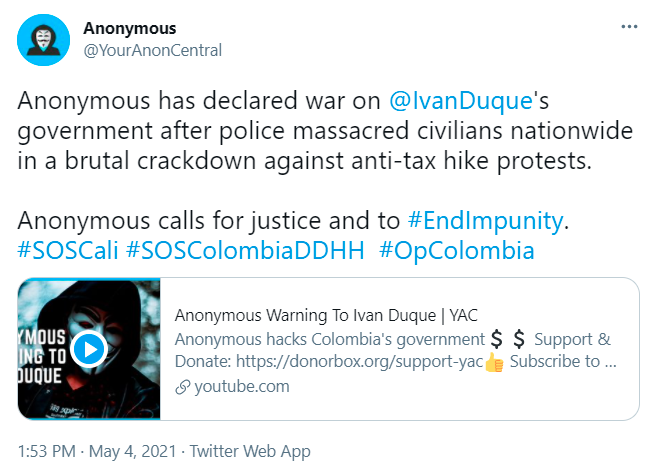 Bogotá, COLOMBIA – Anonymous, an international hacking group known for attacking governments, multinational corporations, and the church of Scientology, always seemed like a story out of an action film that, no matter how interesting, can’t affect your life.

Since late April, Colombia has been swarmed by a multitude of protests that started because of a new tax bill that would hit the middle class. They led to the ultimate removal of that tax bill, the resignation of the Minister of Finance, the removal of a new health care bill which would give more power to private health insurance companies, and free college for the next semester in public universities for low-income students.

Throughout the series of protests there have been various accusations of human rights violations by the police, military, and a Mobile Anti-Riot Squad known here as ESMAD.

In the midst of this, Anonymous went to work.

On May 4th, hackers disabled the Colombian military’s website, and in the process released  information via Twitter on 168 military officials, which included emails, phone numbers, and passwords. Anonymous claimed responsibility and some military officials such as Colombian Army General Eduardo Enrique Zapateiro, later confirmed that their information was indeed published.

At the same time, the hack impacted Google so a search for the Colombian military read: “The ASSASSIN Colombian military … help us, they are killing us, today 4th of May 2021 Hercules airplanes arrived at the Cali airport because general Zapateiro is in charge of making the city go back to normal in 24h.”

The same day, later in the evening, with the military website still unavailable, they took down the websites for the Colombian Senate and President Iván Duque. Searches yielded only different error messages.

Anonymous released a statement through one of its Twitter accounts after those incidents.

“Anonymous has declared war on @IvanDuque’s government after police massacred civilians nationwide in a brutal crackdown against anti-tax hike protests,” the statement said. “Anonymous calls for justice and to #EndImpunity #SOSCali #SOSColombiaDDHH  #OpColombia.”

After direct attacks against the Colombian government, the online operatives moved on to a more subtle way of fighting.

First, hackers seemed to get into Twitter’s algorithm. When one looked up the word ‘asesino’ or murderer in Spanish, and went to the people section, the first two results were the Colombian president and one of his predecessors, Alvaro Uribe, an ex-president who is now the leader of Duque’s political party.

On May 6th, a peaceful protestor by the name of Lucas Villa was shot eight times by an unidentified van in the city of Pereira, and was confirmed dead on the 11th in a statement from the San Jose University Hospital in Pereira.

In an interview with WRadio, police confirmed that this incident happened and are investigating who is responsible for it.

Villa had become an icon of the protests after videos surfaced of him dancing in the streets, giving talks on public buses to explain why the protests were happening, shaking the hands of policemen, and him shouting some days before his death: “They are killing us in Colombia.”

After Villa’s death, hackers accessed Google Maps and changed the location of his death from ‘Viaduct of Pereira’ to ‘Viaduct Lucas Villa Lives STAND STRONG COLOMBIA’.

Their most recent hack was June 1, when they attacked government officials, most of them from the Democratic Center Party – the party currently in power – by releasing personal information like cell phone numbers, identification numbers, home address, and information about their taxes on Twitter and Telegram. The party released a statement denouncing the hack and stating that police are investigating.

The group of people affected included Duque, his defense minister Diego Molano, Senator Maria Fernanda Cabal and at least 61 others.

In its statement, the Democratic Center Party said, “The plan to destabilize Colombia includes a cybernetic war of disinformation, and marking our political leaders, military and sympathizers, not only by putting them in a negative light, but by unleashing a plan of intimidation and threats to silence them.”

It seems that Anonymous, the faraway characters from an action movie, have come to life in Colombia.

It’s become a game of waiting to see what they do next, because they don’t seem to have any plans of stopping and the Colombian government hasn’t made much progress in protecting itself.