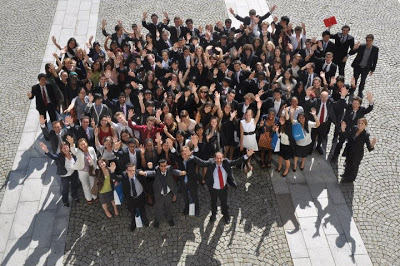 Richard Descoings, director of Sciences Po, in his element, surrounded by students. (Photo courtesy of Rémi Gérard)
LE HAVRE, France – Students and staff of Sciences Po awoke Wednesday morning to the huge shock of the death of Richard Descoings: academician, State Council member, college director, and –  many would say – visionary.
Sciences Po, a prestigious French university that is considered a training ground for future politicians and administrators, was profoundly transformed by Descoings who denounced its elitism, and undertook reforms to make it more democratic and accessible.
Through special admission procedures and an increase in scholarships, he opened Sciences Po to students from disadvantaged backgrounds. He also opened new, region-specific satellite campuses of Sciences Po in smaller cities, and instituted a compulsory year abroad for all students.
His efforts transformed Sciences-Po from a Parisian grande école (literally ‘great school’ and a reference to French institutions that recruit students based on competitive exams) to a university of international ranking that now counts foreign students as more than 40 percent of its student body.
Descoings, 53, who had traveled to New York to attend an academic conference, was found dead in his hotel room there on Tuesday. Though police are investigating, foul play is not suspected.
For all the posts of great responsibility that he held, Descoings was extraordinarily accessible.
Most students had him as a friend on Facebook, where he would post interesting links, statuses, and even music videos.
“I found him an inspiration. He was not high up there but tried to be in contact with the student body to figure out what we needed and how things could be further improved”, said Kristine Görgen, second year student at Sciences-Po’s Europe-Asia campus in Le Havre.
Following the news of the sudden death of Descoings, it was announced that all classes scheduled for the day would take place as planned, in true homage to a man who gave his all to the cause of education.
Social networks have erupted in a frenzy of questions, messages and thoughts.
Some wonder where Sciences Po will go from here. Others compare the school’s loss to the death of the fictional, beloved Professor Dumbledore of the Harry Potter series.
Still others thank him for what he brought to the institution that he loved and cherished.
What is for sure is that the Sciences Po community comes together today to mourn the loss of a truly compassionate and farsighted leader.
Sara Chatterjee is a Reporter for Youth Journalism International.