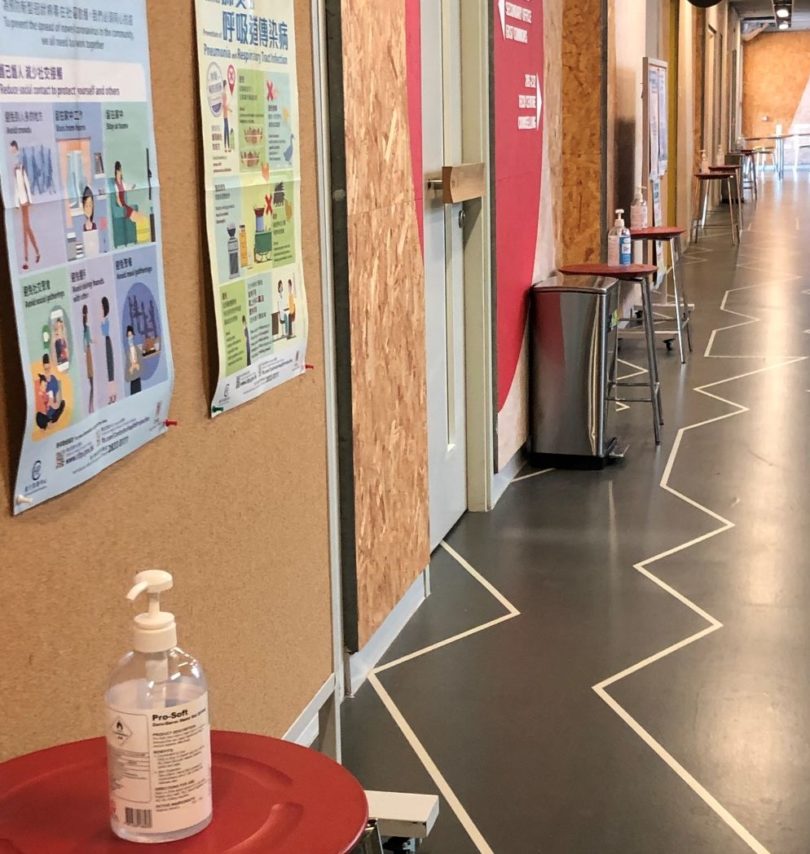 At Hong Kong Academy, bottles of hand sanitizer are closely spaced in the hallway and informational posters about the virus hang on the walls. (Lili Connell/YJI)

Now, after a long and cautious 16 weeks of lockdown, hope for this society is on the horizon.

Residents here lived with compulsory regulated quarantine for anyone traveling to Hong Kong from overseas, no school since January, the 4-person gathering rule, closing of public spaces and compulsory face-mask usage.

With those measures – and citizens’ previous SARS-induced caution – there has been a significant decline in the number of confirmed virus cases since April, with more than 1,048 confirmed cases, at least 985 recoveries and a handful of deaths.

This decline resulted in Hong Kong’s Education Bureau sending older students – age 9 and above – back to class starting May 20th, as long as students and faculty wear masks and enforce precautionary measures.

Returning to school was exciting and nerve wracking to many. It meant many socio-economic shifts and the paradox of returning to an exciting version of normal – but with the social caution many have felt over the past few months.

In my school, we have to wear masks all the time except when eating and exercising. Because of social distancing, we no longer have universal break times or lunch times. The tables are set out apart from one another as they would be under exam conditions.

We have temperature checking charts, a different dismissal plan and hand sanitizer every five feet down the hallway. My peers and I agree that our school is doing well with the enforcement of their precautions, allowing many to feel safe. But some changes are difficult, such as the sparse class transitions and breaks.

A challenge our school is still facing is with the hallways, as teenagers return to social habit in the school context. Additionally, younger students don’t comprehend the complexity of the issue. They have an individual mindset and are not able to identify the domino effect.

Toby Shin is a Year 10 student attending Kowloon True Light Middle School where she has half days at school, enforced mask utilization and advised social distancing.

Shin said teachers can’t entirely control the students, therefore making social distancing much more difficult. She also said that so far nothing would have appeared to have changed except students now wear masks.

A significant question circulating at the moment is in regards to how 16 weeks of online school has affected our education, either short term or long term.

Kai Brenker, a 10th grade student at Hong Kong Academy, said that in the short term, many more people were cheating on assessments or completing them with their tutors during the lockdown. It was easier, he said, but detrimental to one’s academics.

In the long term, Brenker said, he doesn’t think universities will mind enrolling students from Hong Kong now that the rest of the world is suffering. He wouldn’t be surprised if average grades dropped momentarily but doesn’t think the effect will be too significant.

Asked for his insight as to why Hong Kong could rebound so well, Brenker said the city has a high social standard resulting in more private school tuition, the Asian ‘smart’ stigma, high family expectations and the fact that having a low-paying job isn’t an option for upper and middle class students.

So why is Hong Kong recovering while the rest of the world declines?

Citizens here are naturally cautious due to previous epidemics such as SARS resulting in the utilization of masks being accepted into social culture long before the coronavirus.

It may seem astounding that Hong Kong citizens followed government laws after fighting for democracy and freedom for months, but Brenker said they did because our population knew the rules were realistic and understood how Hong Kong would suffer economically and socially, being a mega-city. If they want future independence, they couldn’t protest during lockdown. 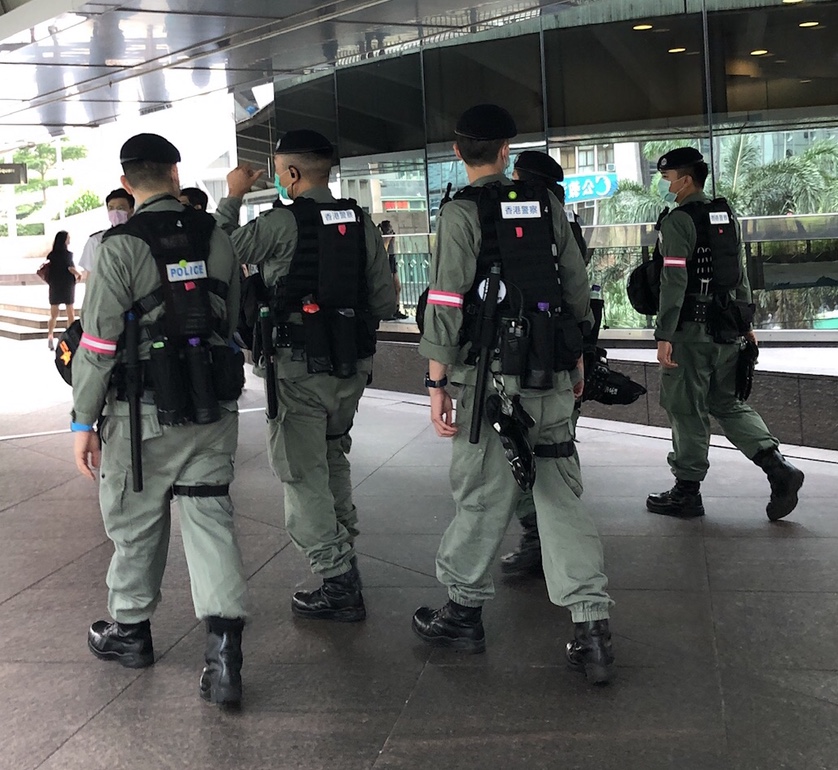 Police leave the scene of a protest in Hong Kong. (Lili Connell/YJI)

Before the virus, Hong Kong was faced with extreme protests regarding extradition, law and democracy. These occasionally-violent demonstrations are beginning to creep their way back into daily life, with 230 people arrested May 10 at a demonstration on Mothers’ Day, according to the South China Morning Post.

The slow return of the protests is a controversial topic as intent and context collide. While people might agree with the protester’s views, their demonstration of those ideals can cause outrage now. A crowd after a May 27th protest near Queens Road in Central Hong Kong. (Lili Connell/YJI)

Many Hong Kong expats like myself don’t believe we have a say in whether the protests are justified or not, as a majority of protesters are Hong Kong natives. We respect their rights and freedom of choice, however. Everyone should fight for what they believe in.

As for the future, it’s unpredictable.

Hong Kong is recovering, but we are also taking risks in opening public spaces again, even Lang Kwai Fong, Hong Kong’s bar and clubbing area – which spurred many of the city’s virus cases.

Traveling has also resumed, and although we are grateful for the privileged luxury, there is still extreme caution.

I believe as long as the two-week compulsory and regulated quarantine stays in place, we will be safe. As for Hong Kong’s economy, the future is unclear but we hope for a steady increase to restore our financial hub.