It would have been
better with the Joker, but Heath Ledger’s death in 2008 after he played the star
villain in the trilogy’s second film eliminated that option.
Nor was Two-Face – the district
attorney who turned bad after his face was burned off – a possibility. The
writers could have used Hush to make more of an emotional challenge for Batman,
Hush being his childhood friend turned super villain. Though the problem with
using Hush is that no one knows who he is and he’s an uninspiring villain,
anyway.

The villain they did use,
Bane, played by Tom Hardy, worked out pretty well since they thankfully gave
him some intelligence.
In his performance as
Batman, Christian Bale did a good job capturing the Caped Crusader’s character
as he was in the three separate comic book series – No Man’s Land, Nightfall and The
Dark Knight Returns – on which the film is based.
Catwoman, played by
Anne Hathaway, was better than the earlier film versions of the character, but
that isn’t saying much. Rather than the complex character in the comic books,
the onscreen Catwoman was sadly one-dimensional.  At least the writers allowed her to keep her
cool sidekick, Holly.
Besides developing the
Catwoman character, I would change the movie in two other places. I would add
the Penguin as a mob boss during the part where Gotham City becomes No Man’s
Land and have more of No Man’s Land in the movie.
The movie doesn’t
include almost any of the details of No Man’s Land. It has, at most, 10 to 15
minutes of civilian courts, but none of the mobs, organized crime or gang wars
found in the comic books.
Though having mob
bosses for No Man’s Land would be a challenge for the filmmakers given that
Two-Face and the Joker are out of commission and all the former mob bosses are
dead – no fewer than three killed by the Joker – it could be easily done. They
could show a trial for the Penguin at the beginning of the movie and then have
him be one of the prisoners released for the start of No Man’s Land.
Batman fans should give
this movie a chance.
Spoiler alert: Spoilers conclude this review
after the image of the movie poster. 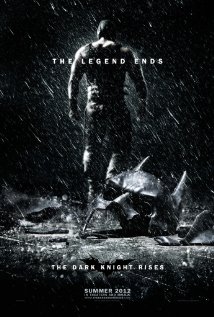 SPOILER ALERT!
I would change the bit
at the end where Batman doesn’t die. Adding that was just cowardice on the part
of the movie makers. They just didn’t want to deal with the angry letters from
upset Batman fans about how you can’t kill Batman.
And, isn’t it a bit silly
that they claim to know exactly when the bomb will destabilize, down to the
second? I mean, there is no way they could know even at what exact time Bane
removed it from the core of the reactor or that they could destabilize it in a
matter of minutes.
And I would not have
made John Blake’s middle name Robin. Subtle symbolism much? I would have made
it Tim because Tim Blake and Tim Drake are very close, but not enough to
immediately give it away. Also, Robin is a terrible name for a boy.
I had mixed feelings
about the shot near the end of Alfred standing in front of Wayne Manor after
Batman ‘dies.’ This is an image borrowed from the The Dark Knight Returns comics, which isn’t particularly good,
though the imagery is cool.
But as a rule, I don’t
think movies should steal pictures from the comics – they might turn out like
the failed Watchmen movie. Though I
do like how Nolan used the screenshot of Bane beating Batman come exactly from
the comics. It’s a famous picture and I’m glad he used it.
My favorite part of the
movie was when all the concrete blew up. Filming it from above made it look like
an earthquake, which was the comic book cause of No Man’s Land, and at the same
time showed the thoroughness of Bane’s plan.