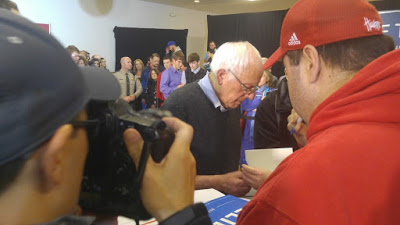 Sanders, a senator from Vermont who running for U.S. president, said he is very proud to have young people involved in his campaign.

Asked what he would say to the youth of the country who don’t believe they are obligated to get involved in politics, Sanders said everyone is going to have to live with what voters decide.

“You are going to shape that future,” said Sanders, who is trying to win a Democratic primary race against former U.S. Secretary of State Hillary Clinton and former Maryland Gov. Martin O’Malley. 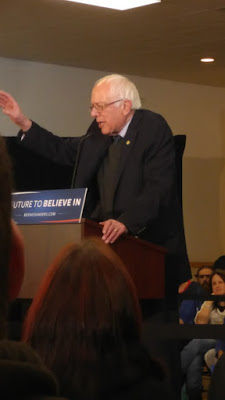 U.S. Sen. Bernie Sanders talks about the overwhelming cost of education at a campaign stop in Underwood, Iowa on Tuesday. (Garret Reich/YJI)

“I know that many people will think you went out and wasted two hours of you day in a political meeting with this guy, Bernie Sanders. You can tell your friends that democracy is not a spectator’s sport.”
Sanders and other candidates are making stops across Iowa, where voters will cast their ballots in a Feb. 1 caucus.
“We have to get past status quo politics and have the courage to take on some very important people,” said Sanders, “in order to create the kind of country our people deserve.”
In Underwood, which is part of Pottawattamie County, Iowa, Sanders highlighted the differences between himself and other candidates in the
presidential race.
“We are the only candidate not to have a super PAC,” said Sanders. Political action committees are a common way for supporters to spend
money to promote their candidates.
Sanders said the committees, which are required to operate separately from candidates, can raise “five to 10 million dollars from a dozen people” in a single meeting.
“We have received two and a half million individual contributions, more than any other candidate in the history of the United States of America,” Sanders said.
After presenting the differences between himself and the other candidates, Sanders launched into his opinions on the economy, job creation, “crippling” student debt and the bigger problems within the fossil fuel industry.
Garret Reich is a Junior Reporter for Youth Journalism International. 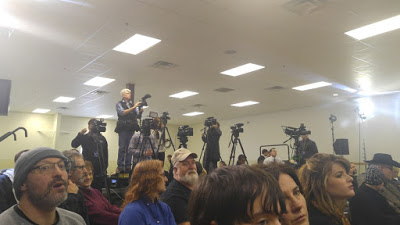 Photographers set up on a platform at the Bernie Sanders campaign event Tuesday in Underwood, Iowa. (Garret Reich/YJI)

***
Your tax-deductible contribution support the students served
by this non-profit organization. Thanks for helping!
www.HelpYJI.org