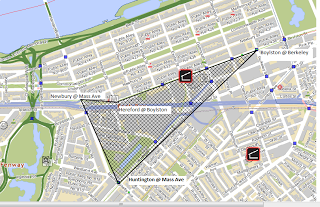 Crime scene boundaries in Boston.
AT SEA OFF THE WEST COAST OF AFRICA – It is evening-time on the M/V Explorer and we are en route to Morocco. Students are eating, preparing for final examinations, and attending evening seminars.
An announcement interrupts us:  “We are sorry for interrupting the programs currently in session, but we have received some important news from the United States. Two bombs have exploded at
the end of the Boston Marathon. No fatalities have been reported. Al Jazeera will be streamed to your cabins for further information.”
I am not American. I have never been to Boston. I remember how abstract the news of 9/11 was many years ago. Now, I am relieved that no fatalities have been reported, but this does not seem to assuage my shipmates, who are mostly American. As I head upstairs, masses of students stream in the opposite direction, towards their cabins, to watch the news.
A few hours later we are not much wiser as to the origin of the bombs.
How does one get news on a floating vessel with limited internet capabilities?
Slowly.
The deans have made a telephone available for students who need to contact their family to ensure that they are safe.
It is not a tragedy in the same way that 9/11 was, but that does not change the heavy atmosphere present on the ship this evening. The solidarity of these students is palpable, and that is impressive. Say what you want about the USA, but this country knows how to unite in times of trouble. I hope that my own country would stand together in the same way if such an event struck us.
In a seminar about Morocco, we learn about bombings that happened in the country a few years ago due to their allegiance with the U.S. There, too, people died. Reminding myself that nobody (that we know of) died today does not make me feel better. Why? Because the intention was to harm, to induce fear.
I may never have been in Boston, but this event is a stark reminder of the kind of world we live and breathe in. In a visit to Japan earlier this year, we noticed that despite the cleanliness of the cities, there were no bins in public. We learned that in the past, bombs had been hidden in bins, hence their scarcity.
So we live in a world where we remove bins from public areas out of fear for bombs. We live in a world where it seems that, soon, we may want to screen entrants and supporters at marathons. Fear will cloud our judgment a little less tomorrow morning, but tonight, nothing feels safe.
I am on a ship with more than 600 students who are supposed to be the leaders of tomorrow. Do we have what it takes, I wonder, to make this world safer?
Note: As this goes to press, authorities have said three people died in the Boston attack and nearly 150 others were injured, some of them critically.
Mariechen Puchert is an Associate Editor from South Africa for Youth Journalism International.