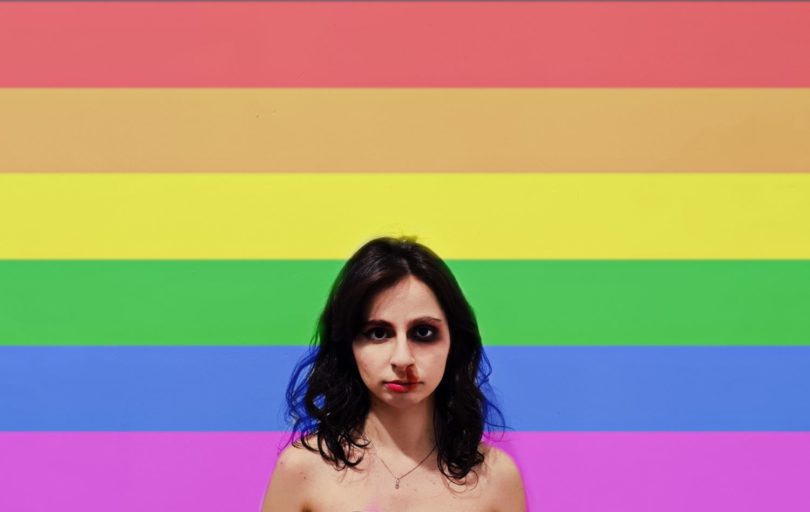 In this photo illustration, the author, who identifies as part of the LGBTQ community, uses a selfie and a Pride flag backdrop to demonstrate two sides of Pride month, the hurt that anyone in the community might have to endure, and the 'normalized' look showing how people sell Pride month. Society in Brazil keeps choosing the "normal" side and ignoring the violence against the LGBTQI community, she says. (Beatriz Sgrignelli Henrique/YJI)

São Paulo, BRAZIL –  People all around the world face disrespect, violence, aggressions, social exclusions, economic inequality and different political treatment, among others consequences, just because of who they love, how they look, their skin color and their politics.

It’s no different in Brazil, where, according to a September 2020 report by Reuters, the number of transgender people killed was up 70 percent over the previous year. Quoting Trans Murder Monitoring, Reuters called Brazil the deadliest place in the world for trans people.

According to the Universal Health Care System of Brazil, one person that identifies themselves as LGBTQI+ was assaulted in Brazil per hour between 2015 and 2017. The data show how rooted the prejudice against this part of the population is in Brazil.

It is unknown how many LGBTQI+ people currently live in Brazil. As the government doesn’t know a significant part of the population’s sexual identity, it’s also hard to guarantee measures against homophobic aggression.

With no data, the people who are dying may not be targeted because they are part of the queer community. So it’s not possible to analyze, with certainty, the quantity of crimes committed or how many people got hurt or killed because of their sexual orientation.

The value of this data is mostly to punish the guilty and protect the LGBTQ community.

The Health Care System is a challenge for members of the community. Doctors seem unprepared to attend a LGBTQ patient – colleges in Brazil rarely even mention the community and its health care needs in their classes.

When discussed, their healthcare is often connected to HIV and sexually transmitted diseases than with the real problem: physical, moral and psychological violence.

Bisexuals and lesbians have to deal with gynecologists not knowing what protections they might use to avoid sexual transmitted diseases.

Gay, trans and other queer people in general suffer every day with prejudice during treatment in a hospital or healthcare facility, with some doctors even denying treatment because, they say, they have no experience with this community.

Mental health care is another gap in Brazil’s system. The stress that minorities feel and the larger risks in everyday life expose them to depression, anxiety, panic attacks and other mental health issues.

Members of the LGBTQ community are given poor treatment or neglected completely. If a trans youth looks for some kind of mental help during their gender transition, most psychologists here are not equipped to treat and care for that child.

Brazil has a long way to go to make its healthcare accessible to the LGBTQ community. Among all the difficulties, the one that hurts most is being forgotten by the state and from the ones who could offer the most help.

Immediate public policies to address the needs of the LGBTQ community are necessary to solve, or at least help, these Brazilians be really proud and happy with themselves.