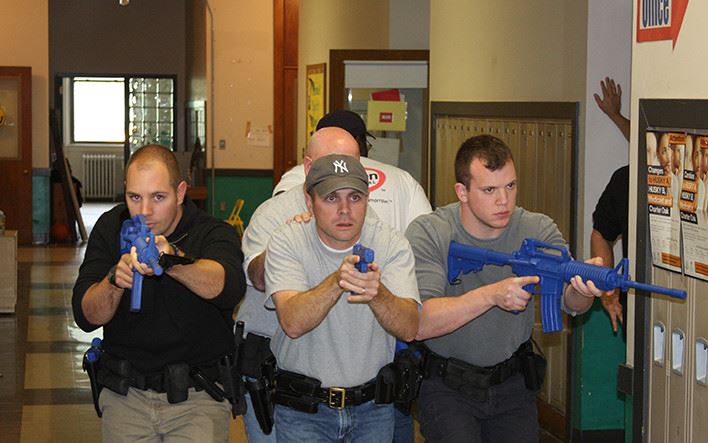 “We don’t need police in the schools every day in Bristol,” said DiVenere. “That’s not the answer.”

But DiVenere said his department is working with local schools to improve security.

“We’ve always had officers in the school, and youth officers working with students, but we don’t feel that it solves anything to have uniformed officers there every day,” the chief said.

DiVenere said police have been working with the Bristol Board of Education for weeks to “come to a plan to make everyone feel safer, to increase security.”

DiVenere said there may be increased security outside the schools, which he said could be a deterrent.

According to DiVenere, more meetings are in the works.

Police will work with the schools until “we can all feel safe and students can learn and feel safe in their schools,” DiVenere said.

At a recent meeting between administrators and faculty, several teachers said they’d like to see a greater police presence at the school.

While some Bristol students said that increased security adds anxiety to an already tense situation, others said they were comforted by the idea of police presence in school.

“I think they should have police officers here on school grounds all the time,” said Fernando Gonzalez, a junior at Bristol Eastern High School.

“We should have more security,” said Jack Winters, a history teacher at Central. “There should be security here 24 hours a day.”

But Winters said, “Bristol won’t do anything until something happens.”

Gonzalez said there should be “at least two to three cops in each school.”

Some wondered about the wisdom of beefing up security too much.

“I feel safe at school usually,” said Amy Wheelock, a senior at Eastern, “but increasing security and having cops here would make me paranoid. It’s more a threat than anything- the idea makes me feel unsafe.”

Michael Traverso, a social studies teacher at Bristol Eastern, said, “You can’t turn the school into a prison. Too much of that and it ceases to be a learning environment, a place where people feel safe.”

Jennifer Swinsick, a Central sophomore, said having cops in school would make her “feel like we’re not being trusted.”

Don Namnoum, a sophomore at Central, said, “Did they make a difference in the Columbine High School shooting? What difference would they make here?”