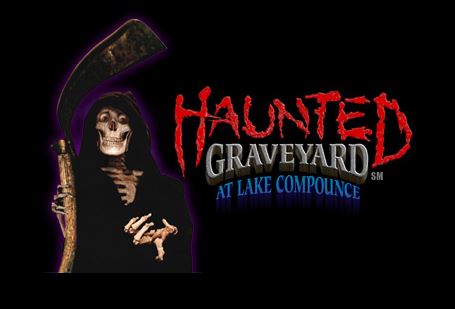 BRISTOL, Connecticut, U.S.A. — Did you know you don’t have to go out of town to find some scary places in Bristol?
Well, I’m not surprised either.
And every October weekend, Lake Compounce rolls out its cobwebs (hey, it is old) and gravestones to become one of the spookiest places in the state.
You wouldn’t know it by the annoyingly loud thunder sounds in the entrance tunnel or out-of-place fog machines or the gravestones that look like cardboard cutouts, but there’s a small jewel in the Lake that has the ability to scare the wits out of most people.
At the end opposite the actual lake is where the park is hosting The Haunted Graveyard for the second year.
In fact, it has become so big, it now boasts about four haunted houses, a large cemetery, haunted woods trails, a haunted cornfield, and that’s just all I could remember when I could open my eyes.
Let’s start from the beginning.
Throughout Lake Compounce are small mini-rooms that give some preview of what to expect if you decide to pay some money to see the Graveyard. They’re only a room or two of chills, but it will get a free screech out of visitors.
The clown Fun House was especially entertaining if anyone has some clown phobias.
Also roaming the park are some monsters and freaks (besides the regular park attendees) to meet and greet with the little ones.
If I didn’t know better, it was like Disneyland in Transylvania.
The monsters were quite creative, to tell you the truth. What other park would think up an ugly pimp monster?
But I digress.
After spending our day out at the park, I made my way past the Top Spin ride and started getting in line for The Haunted Graveyard since it was getting eerily dark.
The line, considering it was only 8 o’clock, was quite long, so I wouldn’t suggest coming in at 9:45 hoping to get in 15 minutes before the park closes.
But the line did move along amazingly well.
And although quite cheap and cheesy, Lake Compounce even threw in some hourly magic entertainment on a stage built by the Graveyard entrance.
Now if they could do that while waiting to ride Boulder Dash on peak season, we’d be all set.
In line, boredom consumes you and the hundred or so other people in line.
Sara Hall, far ahead of us in line, said they’d waited “for like 10 minutes.”
“I’m cold,” complained 11-year-old Britney Fignar. “This better be good.”
And, if you make it through the line without dishing out $2 on glow sticks, you’re doing good.
Before you enter, you’re briefed on not touching the actors and props and so forth. The man at the entrance said the tour takes about 45 to 55 minutes.
Personally, I’m not sure if my nerves were ready for more than a half an hour’s worth of fright, but I took the dare.
After waiting for the group before of us to get ahead before we entered, a creature bursts out the door. A few screams of terror and we’re in.
I don’t want to give away the entire Graveyard experience, but I must say, it has everything.
It seemed like it never ended, but maybe that was because I kept on running into walls and actors.
You go through one haunted chapel and out into an open cemetery.
One piece of advice: never believe that something even remotely human could be a statue, because most likely, it’s an actor that’s about to jump out at you.
After the cemetery, my heart probably stopped because the rest was a huge dizzying array of monsters, ghosts, and more monsters.
You go through a haunted forest, a maze of maize and very nicely camouflaged monsters, and who knows how many more houses.
Monsters on the bed try to grab you, Draculas try to eat you, and it seemed like every monster had a thing for my group, because they chased us throughout the whole place.
We ran and pushed each other so fast in fear, we finished the whole Haunted Graveyard experience in a good twenty minutes.
That’s got to say something, right?
After collecting our nerves and scattered and rattled brains, out comes the next group from the experience.
“It was great!” exclaimed Joey, Jason, and Tim from the Zaprzalka family. “Really good.”
Joey added, “I’d recommend it to everyone.”
Kristy Kestlar said her favorite part was “when we were in the graveyard. I thought it was really great.”
There you have it, a second opinion. And for about eight bucks, it’s quite a deal for what you’re put through.
The Haunted Graveyard is open every weekend at night for the month of October so get yourself out there and see all the freakily ghoulish decorations they’ve put up around the park.
Spend a few hours at Lake Compounce too, while you’re at it.