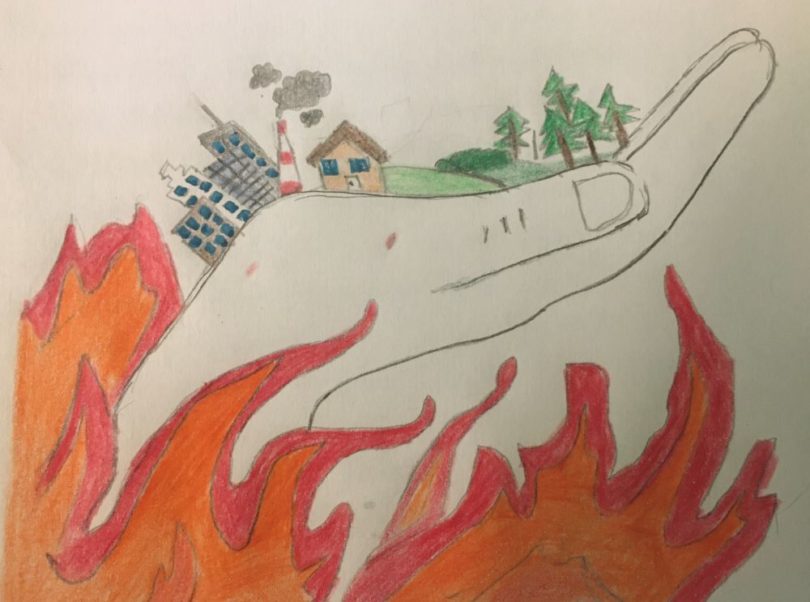 Alexandria, Virginia, U.S.A. – On a Saturday evening I find myself in a meeting with a dozen other teens, many of them talking animatedly with frowns etched across their faces. As a board member for a local youth climate organization, I meet up weekly with youth directors to brainstorm and make monthly plans.

Talking over Zoom, we discuss the latest crisis: the wildfires setting the west coast aflame.

While it is common to have fires during this season on the west coast, 2020 boasts over two million acres of burnt land.

The Oregon Department of Environmental Quality and Lane Regional Air Protection has released data that shows record-breaking data on poor air quality across the state. With unprecedented statistics and frequency of these disasters, we have to question if there is a deeper cause we have to address.

When discussing the driving force behind the fires, most people choose to focus on what appears to have directly started the flames. Some say that 2020 is just an unlucky year – the lightning strikes and the gender reveal party gone wrong were no more than freak accidents. Others blame the poor management of forestland by local officials.

The truth is much starker and lies somewhere in the middle.

While scientists have been warning us of the effects of global warming for the past 20 years, policymakers have pushed off action, labeling climate change as a problem to solve in the future. The lack of appropriate policies and poor management has led to the effects of climate change running rampant.

In many cities, the sky has turned an unusual shade of orange. Teens take selfies of the red sky and tag it as “romantic vibes” on social media. This leads me to believe that not all people understand the severity of this situation.

Am I the only one concerned over the earth’s uncertain future?

While people of all ages have been taking to the streets to demand action for climate justice, there are plenty more people who believe the climate crisis is not urgent and others who reject the idea as a whole.

We are living in an age when people are doubting science and facts. Who can blame them when our leaders are not setting the right example? Our elected officials are failing us.

Switching to a sustainable economy is not an easy feat. Even when we face challenges balancing the economy, technology, and jobs, switching to a greener lifestyle is something that must be done.

Like scientist and radio host Guy McPherson famously said, “If you really think that the environment is less important than the economy, try holding your breath while you count your money.”

While we are running out of time, it is not too late to start fixing what we broke. The first step is to accept that we have a crisis and unanimously agree that changes must take place.

We are all on the same side, the side fighting for survival. We should start acting like it.

Major fossil fuel industries know the impact they had on the environment for decades. These companies must be held accountable and policies moving towards sustainable and equitable energy sources must be utilized.

Policies, such as the Green New Deal, should be used to ensure that frontline communities are not disproportionately disadvantaged by the harmful impact of climate change as well as the switch to a sustainable economy.

The public should make changes to a greener lifestyle and keep informed on policies. Education on climate change should be started from a young age. Schools should incorporate climate change as part of the curriculum.

The situation is dire, but we also have room to grow and prevent the crisis we are careening into. Now is the time to work together towards a common goal. Our futures depend on it.