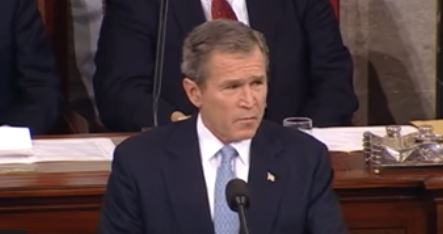 TURLOCK, California, U.S.A. — In his final State of the Union address, it seemed Bush loosened his death-grip on many of the policies which had remained painfully consistent throughout his tenure in office, perhaps attempting to salvage a legacy before he leaves office next January.
With the exception of his Iraq policy, Bush took a more moderate approach to many issues, satisfying if not silencing his moderate Democratic critics with plans for an immigrant worker program and healthcare legislation for the middle class.
Nevertheless, Bush’s proposals were somewhat tainted with the inevitable sense that they will be rejected by the next president, who, if political approval ratings mean anything, will be a Democrat.
Bush’s effort to unite the American people in the fight against terrorism – as it was following the September 11 attacks in 2001 – is, to say the least, an old song. Many Americans now tune out.
Additionally, his calls for increased troop levels in Iraq are unlikely to occur.
In this context, his focus on domestic issues is well-placed. A confident, yet non-specific commitment to balance the budget and regain the nation’s economic footing aim to address what a majority of Americans are most concerned with.
Bush’s State of the Union may actually be a thoughtful power move by the GOP.
The Democratic Party’s gain in the House and Senate during the mid-term elections in 2006 indicated a waning of Republican political dominance. Yet with an economic recession looming – which America has only skimmed the surface of so far – the next president, most likely Democratic, may wind up like Herbert Hoover.
The Democrats could be blamed for a weak economic situation and their proposals discredited.
After all, the man (or woman) in the Oval Office is blamed for the bad, and praised for the good. The factors driving American voters are far more simplistic than many assume.
This would then offer the opportunity for the GOP, if power is lost this year, to reclaim political majority soon.
In the end, politics is luck, money, and a sharp tongue. All politicians have the latter two. Let the best man win.

Daniel Lee is a Reporter for Youth Journalism International.