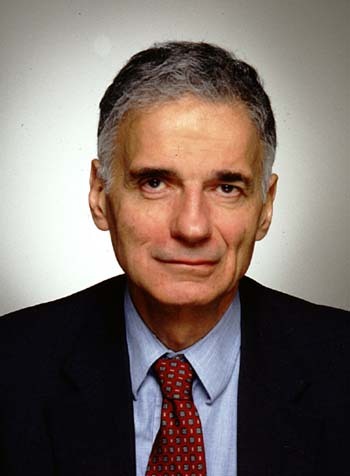 BRISTOL, Connecticut, U.S.A. — “Run, Ralph, run!”
These cries were heard across the United States this Sunday, when consumer advocate Ralph Nader announced his candidacy for the presidency.
Nader will not be running as a Green Party candidate as he did in 1996 and 2000. Instead he will be running as an independent. This liberation from any party ties means Nader will lack most of the organization he had in the previous two elections.
As a result, Nader hopes to gain votes by tapping into a facet of American voters that both the Democrats and Republicans fail to exploit — younger voters.
Nader stands up for many issues that kids can relate to.
One issue that many kids care about is drug abuse.
With gang wars raging on city streets and over half of high school seniors now reporting that they have smoked marijuana, many teens are interested to know that Nader supports the legalization and taxation of some illegal drugs. He declares that, through legalization of drugs, the government can lessen its focus on the failed “War on Drugs” and focus on other things.
Nader also calls for the U.S. to hand Iraq over to the United Nations, restore the constitutional rights of American citizens and backs the worldwide elimination of nuclear weaponry. These key issues have touched many younger people throughout the country .
“Ralph Nader is the only candidate that honestly represents my friends and I,” said 19-year-old John Barbill of Seattle. “Some people are afraid to vote for Nader because they think that he’ll hand the election to Bush, but Kerry is just as bad as Bush!”
Barbill has a point.
While John Kerry is running on an anti-Bush platform, teens nationwide might be a little confused about Kerry’s record.
Kerry voted for President Bush’s war in Iraq. Both Bush and Kerry supported the North American Free Trade Agreement and the World Trade Organization.
Kerry even went to the same college as Bush — Yale — and was in the same secret society as the president — the Order of the Skull and Bones.
It’s no wonder that many younger voters cannot help but see Kerry as a “Bush Lite.”
Even if Nader does get a youth following in the campaign, youth support rarely helps a candidate beat a well-rounded political figure.
One need only look at George McGovern’s failed campaign against Richard Nixon in 1972 or even at the Howard Dean’s campaign this year to see that youth movements usually lose steam and fall apart.

Steven Durel is a Reporter for Youth Journalism International.