BRISTOL, Connecticut, U.S.A. — When “Godspell” is performed at Bristol Central High School next month, student actors will tell the story of Jesus through humor and music.

“I love this play because you can improvise a lot,” said senior Crystal Bilodeau, “and I wanted to do it because the music is absolutely beautiful.”

Although the director, James Smith, is in charge of all final decisions, the cast works together to create many of the more imaginative scenes. They take everyday situations and turn them into funny and sometimes ironic skits. 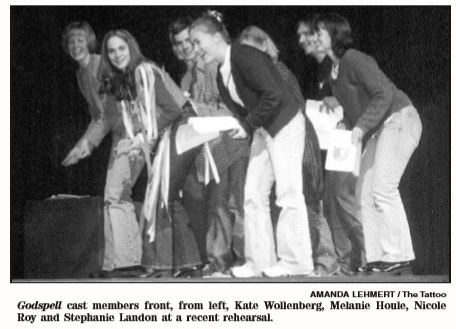 The play, which ran on Broadway for years, aims to entertain the audience while teaching about the Bible by showing Jesus journeying through its stories. The actors, including junior Matt Martin as Jesus, combine short scenes with humor to depict their own versions of the Bible’s life lessons.

The bond between the actors — and the respect they have for each others’ talents — was evident during a recent rehearsal.

Even though the cast consists of seven seniors and one junior who have worked together on previous performances, they welcomed two newcomers, junior Jason Sirianni and sophomore Stephanie Landon, with open arms.

The apparent closeness within the cast makes for a better play. Bilodeau, who has been involved in performing arts since she was a freshman, will star in the musical as one of her two final theatrical performances as a Central student. Bilodeau and the other actors laughed frequently and appeared to enjoy themselves during a rehearsal.

Although on opening night the actors hope their performance will appear to be effortless and natural, it takes an enormous amount of time and effort to perform a musical of this stature.  The cast plans to practice for eight to nine hours weekly.

All their dedication should pay off in the end.

On November 20, 21 and 22 don’t be surprised if you leave Central’s auditorium doors feeling awestruck with the talent and ambition of these 10 amazing high school students.

Tickets will be available at Ink Spot Printing, 43 Middle St., starting Nov. 2. They will also be on sale in Central’s lobby from 6 to 9 p.m. on Mondays. Tickets are $7 for students and seniors, $9 for adults.