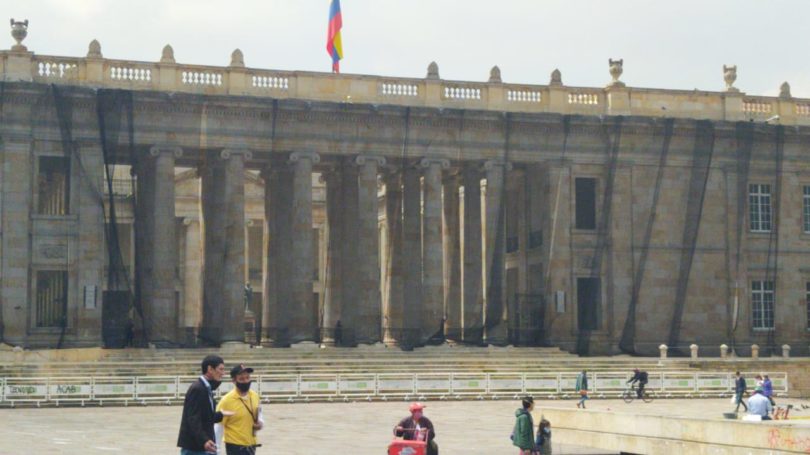 Bogotá, Colombia – The ghost of false positives always comes back, and thanks to a new report, this time it’s more controversial than ever.

False positives are one of the darkest corners of Colombian history. Here, innocent people killed by the military in its fight against guerrilla groups are known as “false positives.”

According to a recent report by Colombia’s Special Jurisdiction for Peace, there were 6,402 false positives between from 2002 and 2008 – a number nearly three times larger than the previously thought.

In battling guerrillas here, the military specifically selected civilians, murdered them, and then framed their deaths as casualties of the armed conflict.

Former President Alvaro Uribe Velez, who led the country during this period and Juan Manuel Santos, who was then the defense minister – and later served as president – are now under investigation for possible involvement and knowledge in the cases.

These two former presidents – whether they were involved or not – must speak up about what happened.

Uribe responded with a public statement on the same day as the February 18 report by the Special Jurisdiction for Peace. In his statement, Uribe doubted the legitimacy of every single one of the deaths and accused the human rights organizations helping to find the data of being biased against his government.

Uribe also has been talking about reforming the Special Jurisdiction for Peace – the organization that exposed the information.

In his terms, this is code for: It’s not benefiting me, so it has to change.

This organization, even if it has some faults, was created for the purpose of exposing what happened over 60 years of armed conflict. It has exposed actions by the guerrilla group FARC and various other governments.

The Special Jurisdiction for Peace isn’t a tool against Uribe or a specific organization. It’s a tool to discover all the mysteries of the past that in other circumstances would remain unknown.

It’s unacceptable that Uribe and his party continues the narrative that the Special Jurisdiction for Peace is lying. Since the start of the peace treaty, a specific branch of politicians has tried to dismantle the organization, to discredit their findings by accusing them of being biased when they’ve exposed both sides.

Uribe and his party are trying to create a new system apart from the Special Jurisdiction for Peace.

It makes you wonder what secrets they are scared of being found.

Their lies damage the bandaged peace that barely keeps itself from falling apart.

One would believe that people would do anything to stop a conflict that has left thousands dead and millions displaced, but to maintain their reputation they say what they must, even with devastating effects.

Even with all the questionable statements from Uribe, he must speak up about what happened. Not for himself or his career, but for the families of the victims that have been waiting for more than 10 years for the retribution of their loved ones. He must speak up for the innocents who were murdered by the army that was supposed to protect them, and for the nation that is still experiencing the effects of the past.

Because how is a country supposed to cure its wounds when we don’t acknowledge they exist?

Year after year, the ghost of false positives always comes back with a story darker than the one before. Only knowing the truth from two ex-presidents and others involved will it stop haunting us.

Ana Fadul is a Junior Reporter with Youth Journalism International.