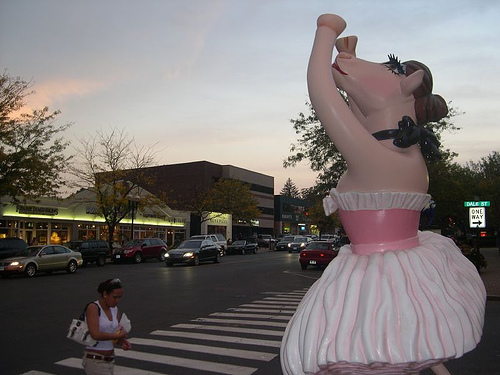 WEST HARTFORD, Connecticut, U.S.A. – Have you herd the moos?
There’s an invasion of colorful, even psychedelic, cows throughout the center of this mid-sized, upscale Connecticut town.
People are stampeding like cattle to see the return of the Cow Parade, an international public art show on hooves.
For the Cow Parade, local artists use a variety of materials to transform the nearly life-size figures of standing, grazing and reclining cows into fab-bull-ous creations, each with its own personality and style.
This year’s artists have outdone themselves, creating cows beyond your wildest i-moo-gination! There are cows with gazelle horns, cows with wheels for legs, a cow made to look the Tooth Fairy and even a cow decked out as a mermaid, complete with tail.

The current show, “The Cows Come Home” – named because West Hartford is the headquarters for this event – is a herd of about 60 lively bovines congregated around the shops of West Hartford.
The show is attracting kids and adults alike.
Bruce Putterman, a Cow Parade spokesman, said the event helps West Hartford in several ways. He said it brings people to West Hartford to see the cows and when they’re in town, they spend money.
Others buy the cows themselves, said Putterman.
“Many of the cows are auctioned off,” said Putterman, who said 10 percent of the proceeds will go to the West Hartford Public Library.
“They’re very colorful,” said Bridget O’Malley, 14, a freshman at Hall High School in West Hartford.
Her favorite cow, O’Malley said, is Moo-ve A-Head Cow by artist Ron Howard, which is a cow depicted as a construction crane in the act of lowering its head into place. She said she also liked the cow working out on a treadmill.
“My least favorite is the cat cow,” said O’Malley, referring to Meow Cow by artist Kim Zimmermann. O’Malley said that cow has “creepy eyes.”
Eleven-year-old Kuba Lis, a seventh grade student at King Phillip Middle School in West Hartford, recently enjoyed the spectacle.
Lis said he thought all the cows were “pretty creative.”
Though he couldn’t pick a favorite – difficult because there are so many great pieces – he said, “Cowabunga was pretty cool.”
Standing on a cow-sized snowboard, Cowabunga, by artist Elizabeth Craig, was all geared up for shredding some ice.
Hartford Hospital Helicowpter, by artist Diana Boehnert, got a lot of attention. It’s showcased on top of a large wooden box. Decorated in police fashion, it had helicopter rotors sprouting out of its back. 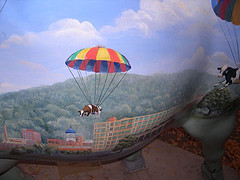 His favorite cow, Putterman said, is Abraham Lincow by artist Ellen Sayers, which he said has the Gettysburg Address painted on the side.
It’s the second time West Hartford has managed to wrangle the popular Cow Parade. The show came to town four years ago for the first time, raising thousands for charity.
At the end of the show, this year’s cows will be sold at auction. According to West Hartford’s website, half the profits from auctioning off the cows to citizens and corporations go to the Nutmeg Big Brothers Big Sisters organization, the Make-A-Wish foundation and the library. Other charities will also benefit.
After they leave, will the cows come back home to West Herford?
“I don’t think they have plans to bring it back again,” said Putterman.
The only reason it came to West Hartford twice, Putterman said, is because West Hartford is the home of the Cow Parade.
“Cow Parade, like [The] Tattoo, is an international organization based in West Hartford,” said Putterman.
In the past, cows have visited Paris, London, Chicago, New York, Stockholm, Buenos Aires, Athens, Edinburgh, Johannesburg, Prague, Las Vegas, Sydney, Dublin, Tokyo, Moscow and Lisbon, among many other cities worldwide.
Besides the show in West Hartford, cows are now on parade in Istanbul, where they’ll graze until the end of October. The West Hartford show ends in early January. Soon, cows will appear in Mexico City.
To see the cows online, get your browser mooving to www.cowparade.com. 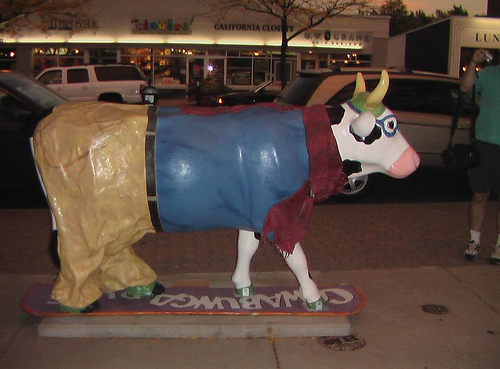