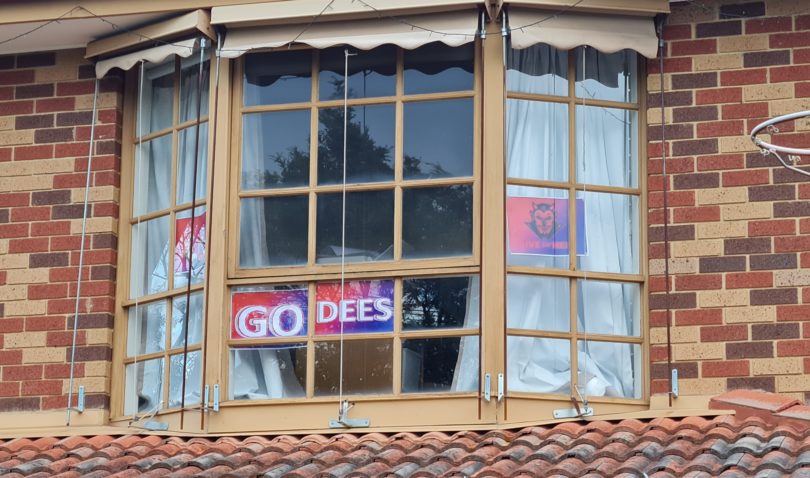 Melbourne, AUSTRALIA – There’s no club in the Australian Football League men’s competition quite like the Melbourne Demons Football Club.

The Demons, affectionately known as The Dees, are the oldest club in the league and the founding club of the entire sport. They’ve also been a bit of a laughing stock of the competition for a number of years.

They haven’t won a flag in 57 years, the longest drought in the competition, and from 2007 until about 2017, they were always lagging towards the bottom of the ladder and never really a serious contender. It was embarrassing at times to call yourself a Melbourne supporter in those years.

This was quite the year of redemption for the Melbourne Football Club boys. After not making the finals the past two years, not only did they make the finals but they finished on top of the ladder for the first time since that magical year of the last premiership more than half a century ago.

After winning their two finals in convincing fashion, the Dees are back in Saturday’s Grand Final for the first time in 21 years and have a real shot at finally ending that drought tonight.

“Fairy tales do come true, but it’s still just a tale. One day we’ll look back and regale the team of 2021 and all the anxiety will be forgotten,” said Suzanne Considine, a leader in the Demon Army.

Other footy fans don’t fully understand what it’s like to have witnessed your team get belted week in week out for a decade, so the fact that the Melbourne boys have made the Grand Final in such dominant and convincing circumstances makes this tilt at a premiership all that more special for the Melbourne faithful.

But this excitement at making another Grand Final comes with a tinge of sadness for much of the supporter base.

The AFL men’s Grand Final is normally held at the Melbourne Cricket Ground, but with an ongoing lockdown and pandemic restrictions in Melbourne, this year’s decider had to be moved across the continent to Perth.

Perth fans will get to experience a Grand Final live for the first time in the league’s existence, but much of the Dee’s supporter base is in Melbourne. Those fans won’t be able to attend the match.

What makes this move away from Melbourne even harder for most fans is that the Western Australian state border – Perth is the capital city of Western Australia – is closed to travelers from Victoria and New South Wales, so fans couldn’t even fly over to attend the game if they wanted to.

The Demon Army are the club’s official cheer squad (cheer squads in the AFL similar to the NFL Supporters Groups), and this group of dedicated Dees fans have not only stuck by the side through the worst years, but have often gone traveling the country supporting the team, spending thousands of dollars in doing so. They are behind the goals every game – rain, hail or shine.

Whether the team is up by 100 points or down by 189, they are there cheering their hearts out. Some may call this crazy, but this is an amazing and special group of people and are among the hardest hit emotionally by not being able to go to tonight’s game.

Many of the Demon Army members have attended Melbourne games for decades, and 2021 would have been the first opportunity they had to see their team in the Grand Final with the team actually having a genuine shot at winning.  (The Dees did make the Grand Final in 2000 but were the serious underdogs.)

When Melbourne won its way into the 2021 Grand Final, the overwhelming emotion among these Dees fans was positive, despite the knowledge that they weren’t going to be at the game themselves.

“Over the moon,” said 71-year-old John Clare of Melbourne, who once worked as a trainer for the team. “Very excited.”

His daughter Nikki Clare said, “If this is a dream, please don’t wake me!”

Melbournian Carlie Jakymczuk, 44, said that she was “absolutely over the moon that my beloved Demons are in the Grand Final… I have not seen us play in that way for a very long time.”

The Demon faithful had mixed emotions upon learning that Perth would host the championship match. They were devastated for obvious reasons, but many were also accepting of the situation.

As Victoria’s covid case numbers kept rising, they could see the writing on the wall.

Nikki Clare put it succinctly in a way many Demons fans can relate to. “Of course this would happen to the Dees. But it is what it is.”

Mandy Horsburgh, a member of the Demon Army from Melbourne, said the covid situation made things clear.

“By the time this came around I knew we weren’t going,” Horsburgh said. Unlike others, she said, she didn’t bother trying to find loopholes in the system to legally gain entry into Western Australia, such as quarantining for two weeks in the Northern Territory before flying on to Perth.

“I was realistic enough to know we weren’t going to get there. Don’t get me wrong, I’m just so terribly sad,” said Horsburgh.

Horsburgh described the anguish that all Dees fans are feeling.

“I don’t know that many other people really understand the pain of not being there. You have to put on a front of happiness and pretend to those that don’t understand that it’s okay. But it’s not okay, we’re not okay and I’ve now tried to bottle that up and push it down deep inside.”

John Fryer, 65, summed up how many in the Army would no doubt be feeling about tonight’s game.

“It will hurt not seeing the match live, but it will hurt just as much not being able to share the day with the Demon Army, the greatest cheer squad in the game.”

Many Dees fans interviewed were optimistic about whether the premiership drought would finally end this year – a stark contrast to the usual cautious optimism associated with barracking for this club.

Brett Smith, 39, offered a typical Melbourne supporter’s response. He still thinks the Dees will win, but is wary of the opponents they face in the Western Bulldogs, another Melbourne based team.

“The Western Bulldogs are going to be difficult, and I think the game will be a lot closer than the results in the prelim finals,” said Smith. “As long as we play our own game and don’t get overawed, we should win.”

But Considine, the Demon Army leader, is optimistic. She said it’s different this year because the last time the Dees competed in the Grand Final, they were the clear underdog.

So no matter what happens tonight, there will be tears flowing from the eyes of the Demon faithful once that final siren goes. They’ve waited so long for this opportunity to witness their team in the Grand Final, and – despite the majority of the most die-hard fans confined to their living rooms for the big game – they’re going to lap up every minute.

Alyce Collett, a Correspondent with Youth Journalism International, is a diehard, cautiously optimistic member of the Demon Army.

Post publication note from the author: In the end, the fairytale came true. The Dees won in convincing fashion and the 57 year drought is over.