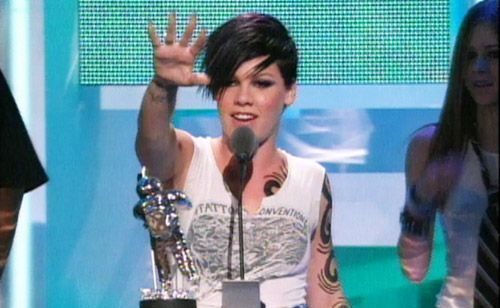 OAKVILLE, Ontario, Canada — While accepting her trophy at this year’s MTV Video Music Awards, singer Pink told the audience, “I’m too drunk for this.”
Actress Winona Ryder is currently facing shoplifting charges while R&B singer R. Kelly is fighting accusations he had sex with underage girls — and videotaped it.
Popular musicians such as P. Diddy and Ja Rule openly smoke cigars in their music videos.
Role models, where are you?
It seems that role models for teenagers are fewer and farther between.
Studies have shown that role models can play a big part in curbing drug and alcohol abuse among teens.
And no wonder.
Pink tells us that it’s cool to be drunk in public. The rock group Weezer perform songs called “Hash Pipe” and “Dope Nose.”
Punk rockers Sum 41 are notorious for increasingly outrageous escapades — trashing hotel rooms, stealing gasoline and slashing tires among them — that they brag about later.
In his his book The Philosophical Journey, author William F. Lawhead explains that we learn to be virtuous by modeling the behavior of moral people.
However, we learn both good and bad habits depending on the people we look up to.
One of Aristotle’s firm beliefs was that it is the moral duty of every citizen to act as a good role
model — a proposition most important for those often in the public eye.
Yet many celebrities, musicians and athletes say that they do not want to be role models.
But Aristotle would answer that since they are so prominent in our society, they are role models, like it or not, and should take this responsibility seriously.
Now don’t get me wrong — many celebrities use their fame in a good way to get a specific message across.
Sarah Michelle Gellar participated in Habitat for Humanity. Elton John continues to raise millions of dollars for AIDS research. John Feldmann, singer of the punk-rock band Goldfinger, is active in animal rights and Julia Roberts has worked tirelessly to raise awareness of Rett Syndrome.
Though we may always have the likes of Robert Downey Jr. and our Britney Spears, it is important to remember that teenagers can easily find role models — if they look hard enough.

Angela Kozak is a Reporter for Youth Journalism International.