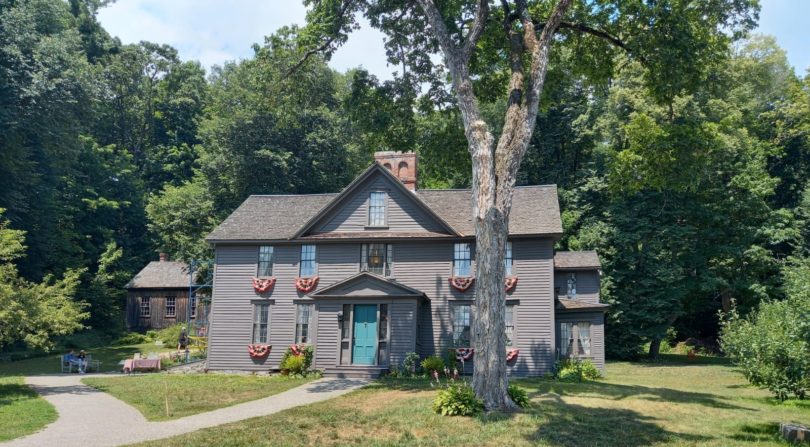 The Orchard House, where author Louisa May Alcott lived and wrote the first part of "Little Women."

Concord, Massachusetts, U.S.A. – To the objective eye, author Louisa May Alcott’s Orchard House looks like any another small, old house on the outskirts of Boston.

But for someone like me – a young woman who aspires to be a writer – it felt like I was just a step away from entering into the world of one of my favorite books, Little Women.

The first room was the kitchen. It was really small. The man next to me could have touched the ceiling just by raising his arm. It was pretty-well equipped. The coffee cups were lined up on the counter, the tablecloths were well-folded in the drawer and the dishes were displayed on the shelves.

But the tour guide gathered us around this cutting board with a beautiful face drawn on it. If you’d paid attention, you would have seen that the door frames also had faces of creatures and angels drawn on them.

They were all made by Abigail May Alcott, Louisa May Alcott’s youngest sister.

Story continues below the photos and video:

In Little Women, Alcott based the character Amy March on that sister. Like Amy, Abigail was a talented artist whose paintings were exhibited in the famous Paris Salon.

Visitors can see scribbles and drawings on every wood surface and door frame of the house. She was clearly a gifted artist. Except for the family portraits, the artwork you’ll find in the house was made by Abigail.

When someone would visit the house, Abigail would sketch their faces on the walls of the art studio her father made for her.

Just outside the kitchen, you will step into the perfectly set dining room which is connected to the parlor.

For me, standing between those particular rooms was incredibly special because it was the spot where the Alcott sisters would put on plays for the whole town, just as the March sisters did in the book.

Alcott described her older sister Anna Bronson Alcott – called Meg in the book – as a great actress. In October 1857, Louisa and Anna helped found the Concord Dramatic Union, which is now known as The Concord Players.

Even so, that wasn’t the most unique part of the house. A few steps away there was a small wooden piano resting below the stairs – Beth’s piano.

Elizabeth Sewall Alcott, better known as Beth, was Louisa’s younger sister. Her sole reason to play music was to cheer her family, just like her character in the book. And just like in the book, Elizabeth died at the age of 22 due to complications of scarlet fever.

Alcott was especially close to Beth. Heartbroken by the loss, she decided to write a book in Beth’s memory based on her life with her sisters. That book would become Little Women.

Upstairs is Louisa’s room. It has two big windows where the sun comes in and lights up the room. Below the windows there’s a small desk. After Alcott returned from her service as a nurse in the Civil War, her father built it for her so she could write while she also rested.

As her famous character Jo March, Alcott dreamed of becoming an author someday. From a young age, her parents encouraged her to write, giving her journals and pens.

Alcott considered that desk a vote of confidence from her father. That’s where she wrote the first part of Little Women.

It was the book that made the house the emblematic site that it is today. But it was the remarkable residents who made it so magical for people like me who are just visiting a century and a half later.

Regina López is a Correspondent with Youth Journalism International.

More about Little Women from YJI: