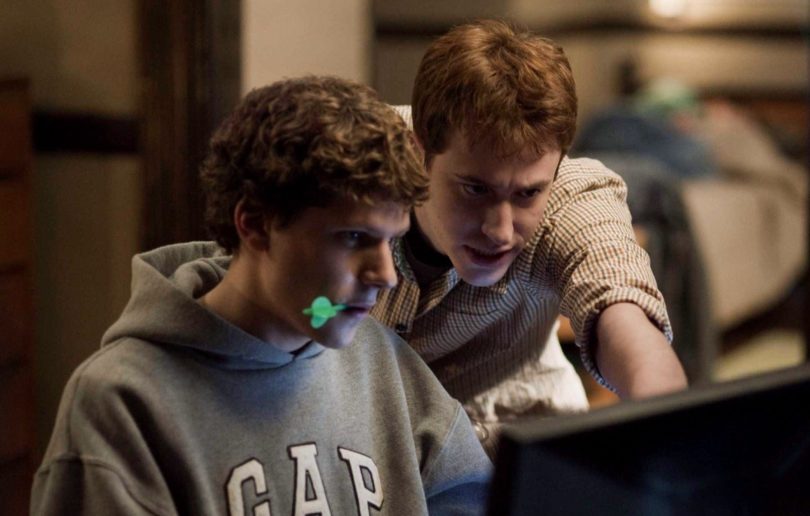 PORTLAND, Oregon, U.S.A. — Stepping into the theater to see The Social Network, I found myself wondering if I was going to look at Facebook differently afterwards.
I looked at MySpace differently after reading a bio of its creators and I was expecting something of the same effect from the movie.
Though I doubted anything in the movie could make me stop using Facebook – because, as a character in the film says, ‘it’s extremely addictive’ – I did wonder if it would make me wary the way the back story of MySpace had.
It turned out, though, that The Social Network doesn’t really tell too much about Facebook, because it’s a character movie.
Sure, it has the development of Facebook from its roots as ‘Thefacebook,’ but where the film really draws strength, and becomes a great piece of cinema, is in its superb characters and phenomenal dialogue.
Let it be known, however, that not every character is great.
Most of the women in the movie fall flat. For the most part, they are portrayed as either groupies or psychotic, compulsive pyromaniacs.
There are two exceptions, though, who didn’t fulfill the stereotype.
One was the jilted ex-girlfriend of Facebook President and Chief Executive Officer Mark Zuckerberg and the other was the attorney’s aide, Marylin Delpy (Rashida Jones who graduated from Harvard in 1997, a fun little tidbit).
But I say, if you are having fun watching a film, then there is something to be said for it – and I thoroughly enjoyed The Social Network.
I had no idea until I saw the film that Sean Parker, the inventor of Napster, had worked on Facebook. But if the movie is correct, then his work was mostly rooted in party organizing.
The film also leaves it up to you to decide whether Zuckerberg stole Facebook or not.
If you are wondering what in the world I am talking about, here is a little backstory: Facebook was launched February 2004 by Zuckerberg, Eduardo Saverin, Dustin Moskovitz, and Chris Hughes. At the same time, Zuckerberg had been recruited to work on the site ‘harvardconnect.com’, based on a remarkably similar idea to Facebook, since it took the idea of social networking and made it inclusive.
Shortly after the launch of Facebook (then known as ‘thefacebook’) two lawsuits were filed.
The first was by Tyler Winklevoss, Cameron Winklevoss, and Divya Narendra – the inventors of harvardconnect.com — who sued for theft of intellectual property.
The second was a lawsuit by Saverin, a co-founder of Facebook, whose shares in the company dropped from 24 percent to less than 10 percent.
Most of the movie is set in discussion among the parties involved in the lawsuits, and the backstory is then explained through flashbacks.
Aaron Sorkin, the screenwriter, keeps everything moving along well, with witty dialogue, a few laughs and a superb lack of pause.
The movie starts out fast-paced and then races along from there, with David Fincher’s directorial style helping the escalation along superbly.
The actors fit for their parts wonderfully, too.
Jesse Eisenberg, who I thought was okay in Zombieland, and enjoyed in Adventureland shows that he is quite adept at playing the eccentric.
Justin Timberlake plays Parker well enough. As the rock star of the film, I suppose his role wasn’t much of a stretch.
The best actor in the movie, though, had to be Andrew Garfield, who played Saverin. I had never heard of Garfield before, but I definitely enjoyed his performance, and hope to see him in many more films soon.
So if you are looking to learn a few things about Facebook, and see a pretty good movie while you’re at it, The Social Network is a safe bet.
It isn’t perfect, but it is fun, and seeing a movie that is based around something that most of us use every day is pretty interesting.
The movie is not Facebook-approved, which was probably for the best since there were no watchdogs from the company overseeing the script.
While it is a Hollywood film, which means some things have been exaggerated, the story of Facebook itself reads like a movie, and most of the facts in the film can be confirmed, making the saga all the more interesting.
Not many movies are worth the 10 bucks you have to shell out nowadays, but The Social Network delivers on many levels.
Now, if you’ll excuse me, my Facebook notifications aren’t going to check themselves….

Talon Bronson is a Reporter for Youth Journalism International.