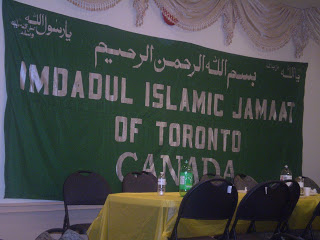 Mehran Shamit, a teen writer for Youth Journalism International from Toronto, Canada, is also fasting for Ramadan.
In Canada, Mehran explains, she’s in a tiny minority. Here’s what she has to say about why she fasts and what it’s like for her in Canada, along with a couple of photos she snapped in her community at the iftar, or meal that breaks the daylong fast.  — Jackie Majerus, executive director, YJI

TORONTO, Canada – As Ramadan starts, many questions like, “Why do you have to fast?” start to pop out at me. It’s probably because only about 2 percent of the Canadian population is Muslim and many people here are still not familiar with Ramadan, even though it’s a very multicultural country. 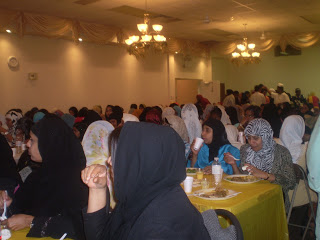 To be honest I don’t mind answering all the questions, but sometimes I get asked the same questions so many times I get tired of answering.

Some people understand why I fast and others don’t and they give me shocked looks. Usually their first response is, “Can’t you even drink water?”

I understand why many people are so shocked, but when you are used to fasting it really isn’t that hard. I get to eat at sundown and throughout the night and I wake up before sunrise to eat some more, so I have enough energy to get me through the day.

One of the reasons Muslims fast is to feel the pain of others who don’t have food. Because many people don’t seem to think about or care about all those underprivileged people out there, Ramadan is a time for people to reflect on how privileged they are and how they take basic things for granted, like food and water.

At least for a month, being in someone else’s shoes and physically feeling what they feel can help people to become more aware of the situations many people have to go through on a daily basis.

Fasting is a lot easier than going through the situations many people face, because I always know that there is going to be food on the table for me to eat before sunrise and at sundown, but for many people around the world, food isn’t always available.

It can be very hard sometimes when I go outside and see people eating. There is that temptation to eat, but even though it’s hard, it pays off later. When I can finally eat, I always remind myself of how hard it was to resist the temptation of eating during the day. It makes me feel a lot better when I know that I’ve tried hard to do something difficult that others aren’t doing and that I feel something most people around me don’t feel.

It gives me a sense of accomplishment.

In Canada, people have many misconceptions about Muslims and about Islam. Because of those misconceptions, they start to believe that all Muslims are extremists. They not only have negative attitudes toward Muslims, but also toward their practices. Many people view fasting as something that is beyond extreme, as something Muslims are forced to do.

In fact, Muslims make the choice to fast to please God and to purify themselves from bad things.

Throughout the month, Muslims try to pray more than usual and many Muslims also finish reading the entire Quran. In Toronto, mosques play a very important role during Ramadan. People use mosques to gather together with other people and to pray together. Many people also spend time in mosques reading the Quran.

Most mosques usually host iftar (breaking the fast) meals. Lots of people come out to Mosques for the iftar meals and there are normally big gatherings. In the gatherings when it’s iftar, people start out by eating a few simple things or drinking something and then they pray the sunset prayer.

After the prayer, people eat the actual meal and have time to socialize. The gatherings are one of the things about Ramadan that many people enjoy and they are great for catching up with friends or meeting new people. The gatherings are also great ways to have cultural exchanges. As you start talking to different people, you find that you learn a lot about another culture. It’s incredible how the gatherings bring together people from so many different cultures and how they create a unique mix between Canadian culture and other cultures.

Even though there are many negative attitudes toward Muslims in Canada and toward Islam, just being able to fast during Ramadan is a great form of freedom for us. It’s a way to talk to others and show others what our religion is about.

Hopefully one day people will no longer have those misconceptions about Muslims and Islam and people will think of Muslims as peace-loving people.