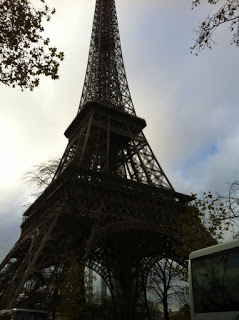 (Kaley Willis/YJI)
LONDON, United Kingdom – After the first round of the French presidential election Sunday, France’s political world turned upside down.  At least, that is what the international
media proclaims.

Whether it’s a new ‘French Revolution’or a political ‘Big Bang,’ there is a consensus among left and right-leaning publications alike that the accession of centrist Emmanuel Macron and extreme-right Marine Le Pen to the presidential run-off represents a seminal moment in European, and indeed Western, politics.

Both are, or at least claim to be, ‘anti-system’ candidates, sweeping the grands partis (the Socialists and the center-right Republicans) who have governed France for the last 30 years, out of the arena.For a world that has seen the United Kingdom cut its ties with the European Union, and a right-wing populist enter the White House, the climate in France might seem all too familiar.
The mainstream media is surprisingly optimistic, with many seeing Macron as a shoe-in for the presidency. But there are also those who see the second round as anything but a closed book, and warn against complacency faced with an ascendant Front National, the right-wing French nationalist party that Le Pen led until Tuesday.
After all, they warn, nobody thought that Brexit or a Donald Trump presidency were a possibility.  Both perspectives must be tempered.  I believe that Macron will be the next president of France, but it is still important to consider the greys on either side of the debate.

Why the world should be optimistic

France is not America. On the surface, this is an obvious statement.  However, it is one that pessimists seem to be forgetting in their rush to see the race as a re-run of Hillary Clinton vs.
Trump. While it is true that Le Pen espouses anti-immigrant and anti-globalization policies comparable to those of the outsider turned U.S. president, it is important to remember this:  On the 7th of May, the French will have a choice of not one ‘outsider,’ but two.
Macron with his charisma, sleek appearance, and perfectly turned phrases is light years away from the crass and abrasive Trump. But he has harnessed the same dissatisfaction with the established political order that brought the latter to power.  “In one year,” he told his ecstatic supporters, “We changed the face of French politics.”
Macron is no French Hillary.  By virtue of her surname and position as President Obama’s Secretary of State, she embodied the intransigent establishment towards which American voters felt such antipathy. They were left with only one candidate in which to invest their anger.
The same is not true in France. Macron is confronting Le Pen on her own turf, using language that was once exclusively hers. Indeed, there were striking similarities in their victory speeches. Both stressed their separation from France’s main parties, both promised true alternance (genuine change, as opposed to flip-flopping between the same two parties), and both promised that they would welcome people to their cause, no matter where their political allegiances once lay.
In America, Trump profited from all of the anti-establishment sentiment. In France, Le Pen might not find this so easy.

Liberalism has found a champion.

Macron has imbued France’s presidential race with something that neither the U.S. elections, nor the UK’s EU referendum campaign were able to provide: A charismatic face for social and economic liberalism.
As much as one may have supported the Democrats or the need to remain in the EU, neither Clinton nor the leading ‘Remain’ campaign figures offered a particularly inspiring vision.  Clinton was devoid of charisma; Remainers let their arguments drown in tepid and apologetic rhetoric.
Macron’s magic is his ability to make the status quo exciting. While he rejects the old left/right divide, he wholeheartedly embraces the EU, and does not shy away from being seen as a defender of globalization. These two issues have become extremely divisive, but he has transformed them into compelling political choices, as evidenced by his approximately 2 percent lead over Le Pen.

A warning from across the channel

French voters have something that UK referendum voters did not: An example of the chaos that can happen if a country chooses to leave the EU. With Britain mired in negotiations, political in-fighting, and a flailing economy, Le Pen’s promise of a referendum on France’s EU membership is unlikely to be as appealing as it once was.

Le Pacte Républicain is a somewhat elusive concept. Essentially, it refers to the principles on which the French Republic is founded: Liberty, fraternity, and equality.  In modern parlance, however, it has come to refer to the ‘pact’ between left and right to stop the extreme right from winning power.  An example of the ‘pact’ in action are the 2002 presidential elections in which centre-right Jacques Chirac fought extreme-right Jean-Marie Le Pen (Marine’s father).
The mainstream parties rallied around Chirac, leading to him winning a remarkable 82 percent of the vote.  When the results of this round became clear, Republican François Fillon and Socialist Benoit Hamon immediately – if resignedly – honored this unspoken rule, both calling on their voters to support Macron.
Macron, Hamon told his supporters, may be a ‘political adversary,’ but Le Pen is an ‘enemy of the Republic.’ Fillon emerged with almost 20 percent of the vote, Hamon with a little more than 6 percent. If most supporters obey their erstwhile candidates, this would give Macron around 50 percent of the vote, making a Le Pen victory – especially a glorious one – unlikely.

And why it shouldn’t

As compelling as the arguments above may seem, the world must not allow itself to be swept away by unbridled optimism.
Here’s why:

Jean-Luc Mélenchon, the firebrand leader of the Communist Party, has not yet committed to the Pacte Républicain.  In his terse concession speech, he refused to endorse either Macron or Le Pen – although whether he will do so in the days to come remains to be seen.  Having won more than 19 percent of the vote, his recommendation is not to be ignored.  While on the opposite end of the political spectrum to Le Pen, he too has courted voters angry with rampant globalization and the EU.  There is a very real possibility that these voters could turn to Le Pen.
Legislative elections
As in the U.S., France elects its president separately from its representatives.  In June, the legislative elections – in which France will elect deputies to the Assemblée Nationale – will take place. While Macron’s En Marche! movement has seen a meteoric rise since its creation last year, it currently has no representatives.  Macron is confident that his candidates will win enough seats to give him a majority, but this is doubtful given the youth of his party and the gritted teeth with which many French voters will support his presidency.
Left and right voters may rally around him now because the only alternative is Le Pen.In the legislative elections, however, they will once again have a full spectrum from which to choose. Those who did not originally support Macron are, therefore, unlikely vote for his candidates. Le Pen’s electorate, angry at her defeat and the collusion of mainstream parties in the Pacte Républicain, will also turn out in force, likely increasing the number of Front National deputies in the Assemblée. All this shows that Macron may well end up a minority President, having to cobble together coalitions for each piece of legislation he wants to pass.  Coalitions inevitably mean compromise. Today he might be a zealous liberal, tomorrow he may well be a pragmatist, hardly different from the grands partis he once rejected. As he is absorbed into the Establishment, this can only leave more disaffected voters turning to Le Pen.

On Tuesday, Le Pen made the overtly tactical decision to resign as leader of the Front National in order, in her words, to ‘unite the French people’ around her candidacy.  However, her willingness to cut her ties – albeit superficially – with the party demonstrates her ruthless pragmatism when it comes to the Presidency.
Recently she has launched a major push to detoxify the FN for mainstream voters, even expelling her own father from the party after his controversial statement that Hitler’s gas chambers were a mere “detail of history.”
She has softened the party’s stance on abortion, the role of women, and even become an unlikely champion of animal rights. As her success on Sunday has shown, her gambit is paying off. Her resignation is purely symbolic, but it might be the gentle push that Fillon and Mélenchon voters – loath to back Macron – need.
Her ability to adapt makes her a formidable rival. Will she reverse her resignation if elected president?  It hardly matters. With her father the founder and her niece – Marion – a leading figure, the Le Pen name is inseparable from the FN. If she wins, her façade may change, but the most toxic of her policies – supported by the party – will not.

Macron is a bandage, not a cure

The international press has not hesitated to present a Macron/Le Pen run off as a Manichean battle of opposing world views. Archetypal of this narrative was The Guardian’s reference to the elections as a ‘Face off for the soul of France.’  Dubbed the ‘French Trudeau,’ Macron is seen by many as the antidote to the wave of right-wing populism sweeping Western nations.  But this is to confuse perception and reality. Macron may make a globalized world look more attractive, but he will not change the fact that globalization entails heavy costs and the alienation of large sectors of society. Liberalism will still be the sick man of Europe – Macron will simply have given him a crutch. So while his world view may win for now, the problems it brings with it will become increasingly acute, leaving the Front National far from the dustbin of history.

With less than two weeks until the second round of voting, most will wait with baited breath to see whether France will fall into the clutches of xenophobic populism.  A Macron presidency is probable and, without a doubt, in the interest of a tolerant and open world. It is, however, imperative that his supporters – French and foreign alike – do not prematurely rest on their laurels.  Whichever of the arguments above one subscribes to, there is no doubt that this race for the Elysée will be the most ideologically charged France has seen, and indeed will see, for many years.
Emily Couch is an Associate Editor at Youth Journalism International.
***
Cast your vote for young voices by making a
tax-deductible contribution to Youth Journalism International.
Thank you for your support!
HelpYJI.org