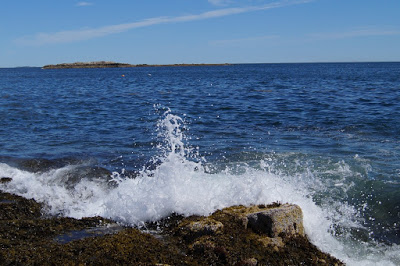 We journeyed north to Acadia from Youth Journalism International’s headquarters in Auburn, Maine, for a day
exploring Maine’s only national park (two of us for the first time).
After stopping for brunch in Ellsworth, Maine, we arrived at the Acadia park visitor center on Mount Desert
Island shortly before noon. Already the park was crowded—a side effect of the glorious Sunday weather. We bought a park pass and headed up Cadillac Mountain, the highest point in the park.

The top of Cadillac Mountain is accessible by car, and most people seem to travel that way rather than hike the
mountain.
The mountain is rounded at the top, with large sections of exposed granite bedrock. Hearty grasses, scrubby brush, and pine trees dot the rocky landscape, but the view from the top overshadows them all. On a clear day, you can see many smaller green islands set like jewels in the sapphire sea surrounding Mount Desert Island. 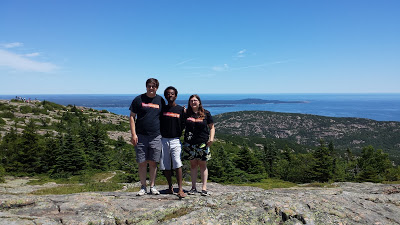 Cadillac Mountain also provides a view over Bar Harbor, the main town on the island, which looked small and insignificant from above.

The mountain’s summit isn’t easy to find – there’s no obvious peak, and the top is fairly flat. Nevertheless, we
managed to find the highest point, where the first rays of sunlight hit the United States each day.

The marker at the Cadillac Mountain summit. (Beth Criado-Band/YJI)

After our adventure on the mountain we set out on the park’s loop road, a winding one-way drive that passes many of Acadia’s most famous features. We skipped Sandy Beach, which seemed crowded, and headed directly for the rocky shores the park is known for.

Acadia’s coast is a full sensory experience. It’s beautiful, of course, but the sound of the waves crashing against the rocks, the smell and taste of the salt air, and the warm, coarse
rock below your feet are at least as important to the park’s magic as its amazing views.

The biggest drawback of the jagged shores near Thunder Hole – one of the park’s attractions – is that getting in the ocean is impossible.

The water is mesmerizing, and you sometimes feel as though you just want to jump in. Anyone foolish enough to try, however, would likely end up badly hurt, if not drowned. 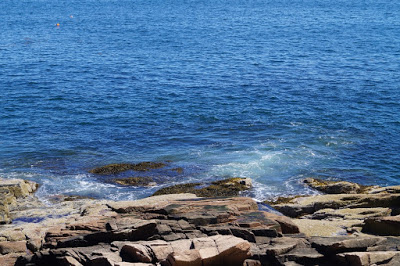 Maine is known for its rocky shores like this one at Acadia National Park. (Beth Craido-Band/YJI)

Thankfully, there are other places where wading or even swimming is possible if you’re willing to brave the park’s chilly water and jaggy beaches.

At Otter Cove, the sea gently laps against the shore, making it a perfect place to get your feet wet and play in the shallows. The sand is hot – roasting even — but once you get to the water, it’s cool, and the heat just dissipates out of your body. It’s a comfortable place to wade around.
Be careful though – the beach and sea floor are covered with sharp rocks and sea life! Crabs, periwinkles, fish and more live in the cove, and odds are you’ll run across at least a few of them in the water. We recommend swim shoes.

One day isn’t enough time at a place like Acadia, and we are all looking forward to going back again someday.

For now, however, we’ll cherish the memories of a place where the waves meet the woods and the crash of the ocean against the rocky cliffs creates a sense of timeless wonder we won’t soon forget.

Your tax-deductible contribution help bring stories and photos from around the world
to the phone in your hand or the computer on your desk.
Thanks for being generous.
HelpYJI.org 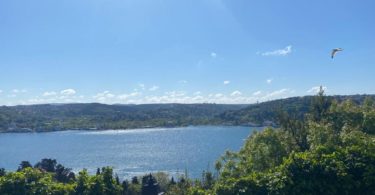