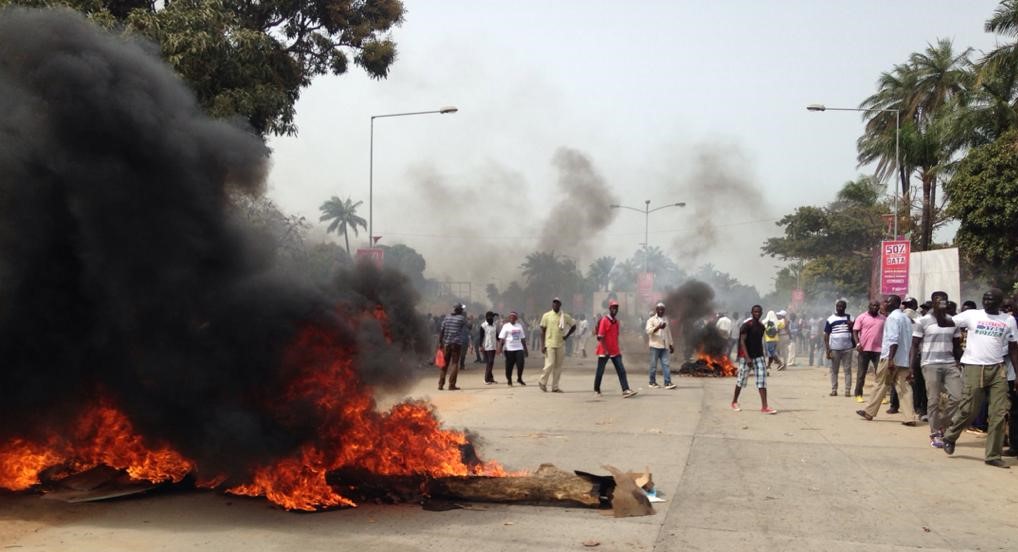 Protesters in Bakau, The Gambia on Sunday set fire to car tires, wood and grasses. They are part of the 3-Year Jotna group and are calling for President Adama Barrow to step down or be removed from office since he has served three years. (Lama M. Jallow/YJI)

Bakau, THE GAMBIA – By 6 a.m. today, police had assembled in Bakau with water to spray at protesters, anticipating a group that insists that Gambian President Adama Barrow step down or be removed from office.

By 9:30 a.m., an intense protest by the 3-Year Jotna group was underway, with people clashing with the police and burning tires, wood and grasses in the street.

Police fired tear gas at the protesters, who rushed to get water and palm oil to rub around their noses to protect themselves from the gas.  Protesters also threw stones at the police. 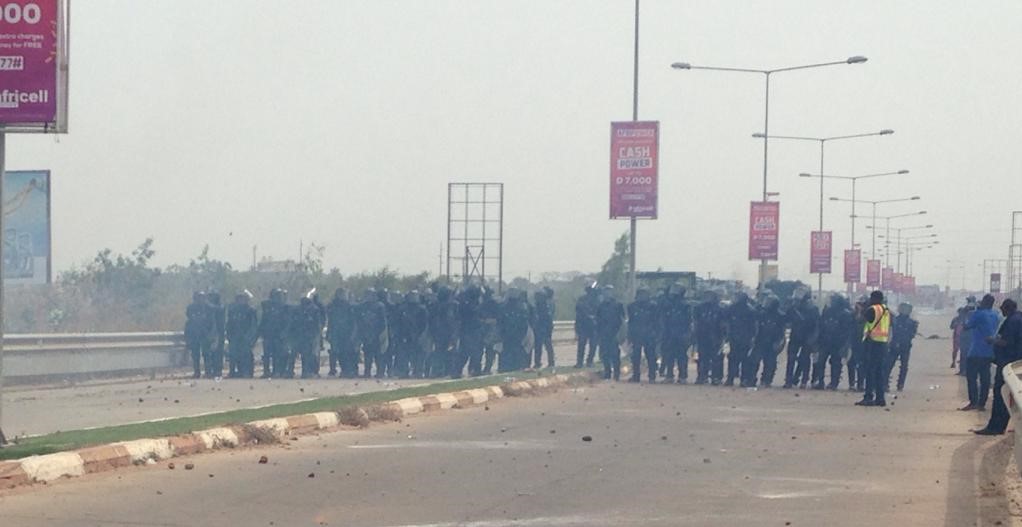 Police at a protest in Bakau, The Gambia on Sunday. (Lama M. Jallow/YJI)

The 3-Year Jotna group made a promise in December to come out this month to “force” Barrow to step down if he refused to peacefully leave office.

They kept to their promises and came out in huge numbers. Some were injured.

The fires on the highway blocked vehicles from passing and created a huge amount of smoke.

The protest is currently been held in different locations around the country. 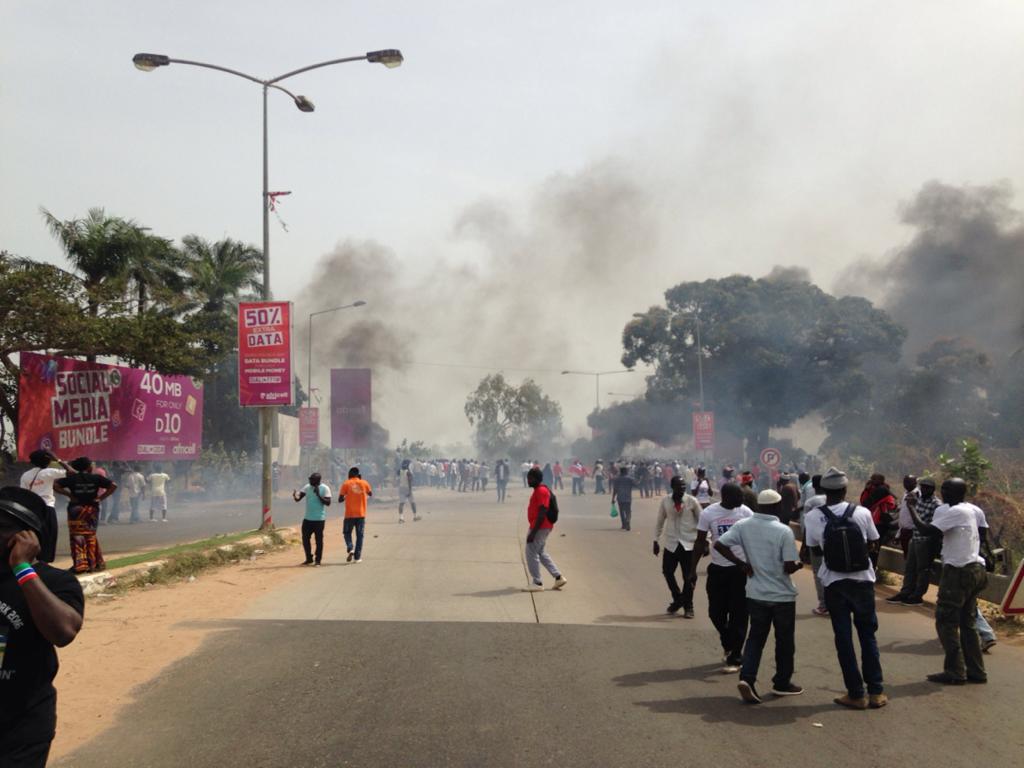 At a protest in Bakau, The Gambia on Sunday. The 3-Years Jotna group is demanding that President Adama Barrow leave office. (Lama M. Jallow/YJI)

Demonstrations in Westfield and Basse in the Upper River Region of the country seem to have more damaging consequences.

Barrow was elected in 2017, saying he would stay for just three years. He now says he wants to serve the standard five-year term.

Barrow’s election rid The Gambia of Yahya Jammeh, its longtime president who ruled with an iron fist. He was widely considered a dictator and the current administration is still investigating allegations of human rights abuse under Jammeh.

Some Gambians are now demanding that Jammeh return from his self-imposed exile.

This is a developing story. Please check back for more. 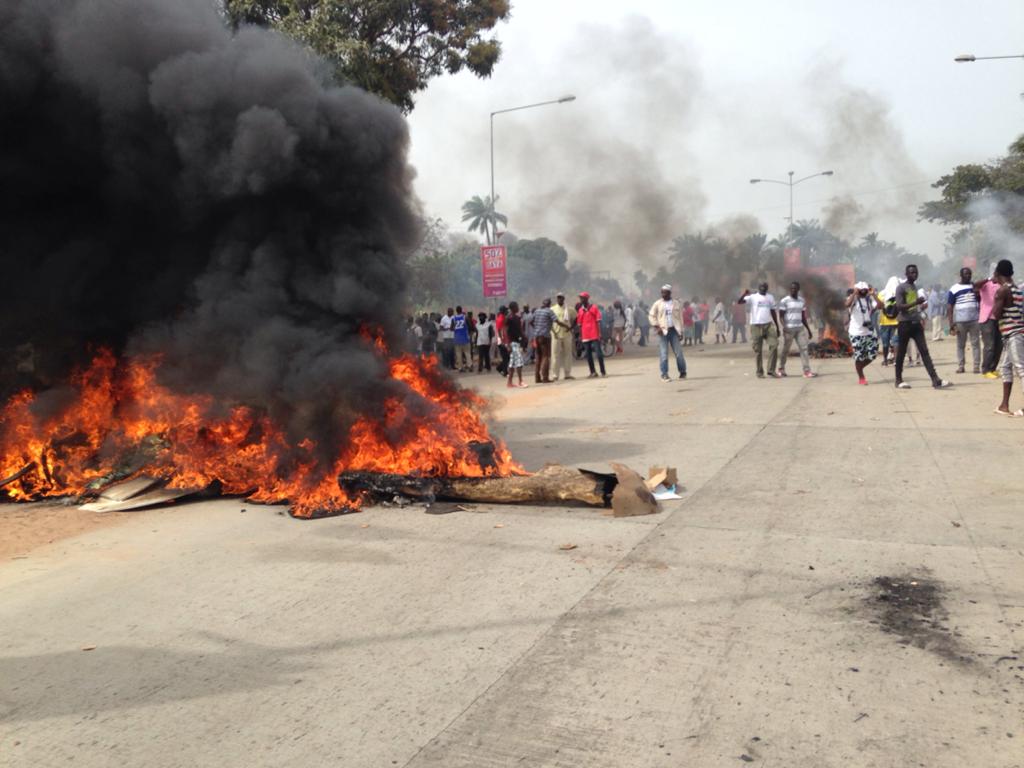 A street protest in Bakau, The Gambia on Sunday. (Lama M. Jallow/YJI)