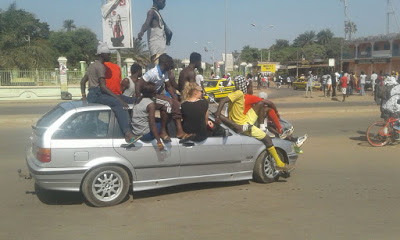 Jubilant Gambian youth celebrate the ouster of longtime dictator, President Yahya Jammeh. (Lama Jallow/YJI)
“It is really, really amazing as I am speaking here. I can’t describe the joy that people are going into here and I’m really, really happy that people, that again, this election without any violence or something else that people were expecting by buying foodstuffs and locking themselves in their homes. But now you can see many people are going outside … Really I am talking about the joy they are going through here.  It’s amazing and right now they are preparing themselves to head to the statehouse in Banjul, the capital city of The Gambia. And, I just can’t say much words … Gambia is expressing its most happiest joys in its history.” – YJI Senior Reporter Lama Jallow, in an audio report from the celebratory scene.
SERREKUNDA, The Gambia – Joyful youth in the Gambia hoping for a better future celebrated the peaceful and democratic December 1 ouster of the nation’s longstanding dictator, filling the streets with cheering crowds.

Young people in The Gambia are especially happy with the change as they had been frustrated with Jammeh and his regime.
“Freedom, freedom, freedom at last,” they chanted in Westfield, part of the port city of Serrekunda, indicating how hard it was to speak out with Jammeh in power.
They’re relieved they can now say what they want without fear of being arrested, tortured or killed – a security that Jammeh never gave Gambians.
They’re happy to have won the election with peace and transparency.
People celebrating in Westfield after learning the election results.
“This is the beauty of democracy,” said Ebrima Ceesay, an expert on elections analysis who was in Westfield for the Gambian elections. In a democracy, he said, a politician rules but at the end of the day, the people decide whether or not to change the leadership.
“That is exactly what Gambians have done,” Ceesay said, adding that Jammeh accepted the results. “I am happy that it has happened peacefully.”
The entire interview with Ebrima Ceesay, by YJI Senior Reporter Lama Jallow

The Gambia is a young country, said Ceesay, with youth making up about 60 percent of its citizens. The incoming president, he said, is expected to invest in the nation’s youth. 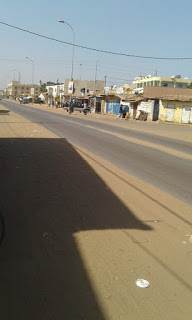 Before election results were announced, the streets of Westfield were deserted. (Lama Jallow/YJI)

One popular slogan among the youth is “no to backway.”  Here, “backway” means the route that people take to Italy – via Libya on small dinghy boats – trying to escape the economic crisis at home.

People blame Jammeh for the lack of economic opportunities for Gambian youth and hated that Jammeh brought some youth who had reached Libya back to the Gambia.

Now some young people seem willing to stop trying to leave the country and instead stay home to work and earn a living without outside help.

Many have stories of their father or another relative in jail for the wrong reason. They are expecting freedom for thousands of innocent victims, force to sleep in Mile 2, the biggest prison in The Gambia, without valid reason.
According to Ceesay, the election results are heaven sent.
“It’s the voice of God. When many people talks, it is as if God is talking,” he said. “Anybody who believes in God today must accept the results.” 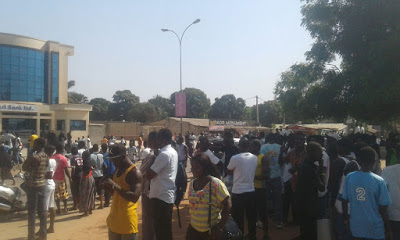 Crowds filled the streets of Westfield after the election results were announced. (Lama Jallow/YJI)

The nation is ready to see Barrow and his coalition party in the State House in Banjul, the capital city. The president-elect has promised to stay in power for
three years and then step down after an open election.

The Mandinka ethnic group is the happiest at the moment. They were not on good terms with Jammeh before the election and are relishing this victory.
Some people, though, are concerned about potential problems with tribalism. Though the coalition is diverse, the Mandinkas have the upper hand and many fear that Barrow’s rule could be even worse than Jammeh’s. Barrow is a Mandinka.
If that happens, then the answers to the country’s problems will still be left unanswered.
But Ceesay said that in addition to working with Gambia’s young people, the new president will have to unite the country.
“We also expect him to bring everybody together,” he said, adding that the election is over. “The nation is divided on the line of politics. We expect him to bring people together.”
Lama Jallow is a Senior Reporter for Youth Journalism International.
Excited crowds outside Barrow’s home chant his name after he won the presidency.

Your contribution to Youth Journalism International makes a difference in The Gambia and everywhere on Earth. Thank you for making this possible.
HelpYJI.org