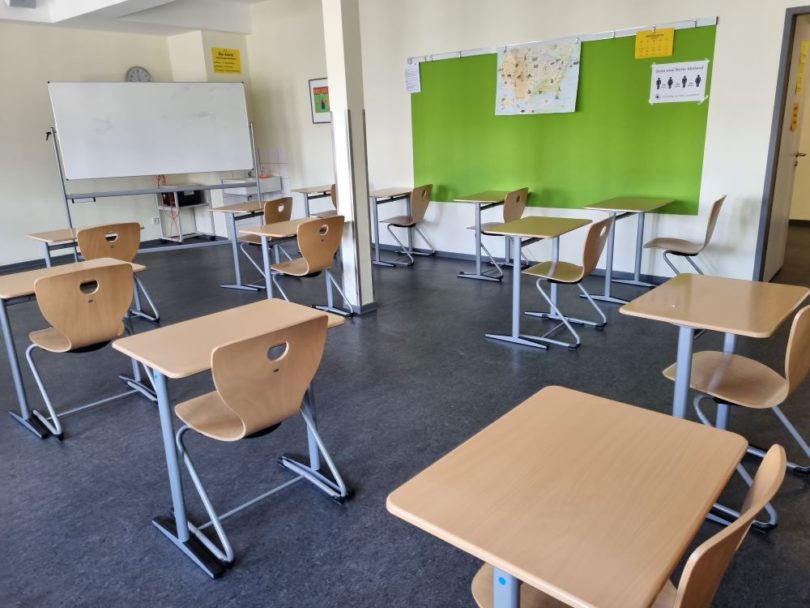 An empty classroom at the Maria Ward Schule in Mainz, Germany. (Annalena Stache/YJI)

Mainz, GERMANY – Some German high school students are finding the changes brought on by multiple pandemic lockdowns are increasing their academic workload and adding considerable stress on their mental health.

Even at some of the country’s more privileged schools, students are feeling the burden.

At the Maria Ward Schule in Mainz, a half-private, Christian all girls’ school, students get an advanced education and benefit from the school’s reputation. It is a Gymnasium, which prepares students for university studies.

In interviews with Youth Journalism International, three 12th year students from the school talked about the continuing educational challenges in the pandemic.

The 12th year group will graduate in March 2022, so students are already looking at universities and other options for after graduation and are feeling pressure to get good grades during the last year of school.

But many of them struggle with fatigue, difficulties with motivation, self-discipline and concentration, and a general feeling of being overwhelmed. The time at home is completely different from the time at school but also cannot be compared to school breaks, since students still have a lot of work to do and cannot meet with friends due to covid restrictions.

While the school canceled exams in minor subjects due to covid, students instead have to give a presentation and hand in a homework assignment in seven or eight classes.

The two exams per term in major subjects are still scheduled regularly.

Many teachers overdid it with assignments, Maisch said.

Eighteen-year-old Sophia Woortman said school involves a lot more pressure and effort than before. While the first lockdown was quite relaxed and seemed like a good way to learn independence, Woortman said, the second one was just draining.

For Merja Stollenwerk, 16, who described herself as an introvert, school at home is less stressful than in-person classes. Although she enjoys talking to people, seeing a lot of people every day is exhausting for her, Stollenwerk said.

Like many others, Stollenwerk said it is more stressful to hand in two or three other assignments instead of taking a test. She said she would prefer one exam instead. Every teacher gives very complex and extensive tasks to do at home, according to Stollenwerk, and doesn’t consider students’ other subjects.

Woortman said it does depend on the subject, but that eliminating tests and adding assignments generally leads to more, rather than less stress for students. She said teachers don’t seem to understand that their subject is a minor one.

Students even have to study for written tests in physical education now, Woortman said, where in normal times they would just have a practical test.

Maisch, though, finds the canceled exams helpful because students can manage their own time and teachers often provide material to work with. Assignments take less effort than one big exam, she said, and can be weeks or even months apart, giving more time for other things.

At home, Stollenwerk has more issues with focusing since parents, siblings and noises distract her. Also, having her work place – the place she has classes and studies – be the same as her bedroom where she sleeps, reads and relaxes, is a big change.

Studying is harder at home than at school for Maisch, who finds itdaunting to ask questions in video conferences and difficult to study at home.

But it’s a good opportunity for her to learn for the future, Maisch said, and become more independent. Homeschooling is so different from taking classes in person that they can hardly be compared, Maisch said.

Woortman, who struggles with an eating disorder and depression, said teachers have high expectations and pay little attention to students’ mental health and stress level. Between the extra work, daily monotony and lack of social contact, she’s felt overwhelmed and even had mental breakdowns.

Woortman also said teachers seem to think students have endless time when they are at home and that their subject is the only one that students have to manage. There is hardly any way to find a balance between school and hobbies or relaxation, she said, adding that taking walks gets boring after walking the same route a few times.

Many students don’t take online school as seriously, Woortman said, and stay in their pajamas for classes and leaving their cameras off during video conferences.

There are also problems for lower income families when children may have to share a laptop with siblings or do not have a computer at all and use their phones for online classes and assignments, according to Woortman. This inequality will be hard to balance out again after the pandemic, said Woortman.

School and home used to be divided, Woortman said, but are not anymore which can lead to an aversion to being home since students no longer have a designated space to just relax.

All three students said they struggle at times with self-discipline and motivation when attending online classes.

For Maisch, it depends on the teacher and her interest in the subject. Some teachers give an overwhelming amount of assignments, she said. In subjects she finds interesting or feels less pressure, Maisch said she is more motivated to do work since she also has the chance to do something else as well.

Stollenwerk talked about a lack of motivation which led her to skipping homework and not taking notes, as well as not paying attention during video conferences. Instead, she used the time for chores or reading.

For Woortman, her depression plays a role. When experiencing little to no symptoms of depression, she was able to manage her time very well, rising at 6 a.m. But she then struggled more and more with feeling overwhelmed and lacking motivation.

Video conferences help Woortman with discipline, she said, since attendance is taken and a missed video conference equals a missed class on the grade report at the end of the term.

Woortman also sometimes finds herself unable to do all of the homework, though she attributes this more to an unreasonable amount of work and a lack of time rather than a lack of motivation. She said she does want to do everything, but sometimes must prioritize and cannot complete every task.

Annalena Stache is a Reporter with Youth Journalism International.