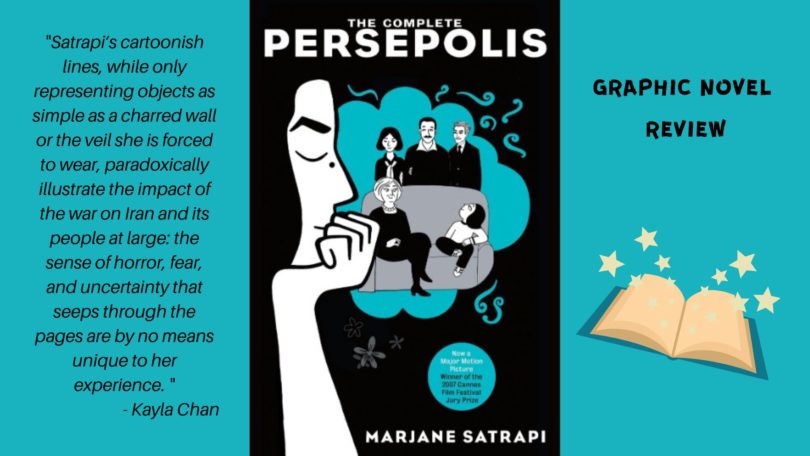 MACAU – With war being on the forefront of everyone’s minds right now, “The Complete Persepolis” by Marjane Satrapi seems an especially timely read.

The more than 300-page autobiographical graphic novel published in 2007 is filled with cutesy black-and-white illustrations that nonetheless convey the gravity and devastation of the Iranian Revolution and the subsequent Iran-Iraq War. It depicts the reality of life amidst such political upheaval through the unique lens of young “Marji,” who is brutally forced to grow up and become “Marjane” as the world she had always known rapidly transfigures.

Marji, a young child at the beginning of the novel, experiences the revolution mostly filtered through the opinions of the adults around her. Her childish naivete is apparent in the games she and her friends play. They dress up and march around pretending to be revolutionaries, their innocence manifesting in this diluted reenactment of the horrors of the war they from the safety of their front yard and the yet-untouched streets of their neighborhoods.

After the establishment of the new regime, Marji is exposed to what revolution truly means for Iran, as the country is, overnight, transformed into a totalitarian state. Nothing, including the clothes she wears or the music she listens to, is safe from the stringent laws that the new government imposes. Marji and her friends weather these changes as another war rages between Iran and their neighbor, Iraq.

Later, Marji leaves Iran for Europe, before returning to a further transformed country that no longer feels like home. Throughout the novel, Satrapi provides a refreshingly honest take on the consequences of coming of age in such tumultuous circumstances, offering a humanizing look at how war affects the innocent in ways beyond the physical.

In the introduction, Satrapi states that her intention in writing this book was to prevent her country from “being judged by the wrongdoings of a few extremists” or for “those Iranians who lost their lives … suffered… or who were forced to leave their families… to be forgotten.” Reading this novel, one can say with confidence that she succeeded.

The illustrations, though simple, are extremely well thought out, and even elements as simple as the visual angle reveal, upon further inspection, surprisingly meaningful insights about Satrapi and her experience. A wide angle, for example, may reflect her sense of helplessness in the vast world, while her feelings of defamiliarization and disorientation upon returning to her homeland can be seen through a vertigo-inducing worm’s-eye view.

Often, there are pages filled with only a single illustration, devoid of text entirely. However, it’s often these pages that best express the frequently indescribable psychological impacts of Satrapi’s childhood, as the searing images of bombs exploding on the battlefield wordlessly convey her horror and frustration at all the gratuitous deaths.

There is a quote attributed to American novelist Richard Price: “You don’t write about the horrors of war. No. You write about a kid’s burnt socks lying in the road.”

Indeed, Satrapi’s cartoonish lines, while only representing objects as simple as a charred wall or the veil she is forced to wear, paradoxically illustrate the impact of the war on Iran and its people at large: the sense of horror, fear, and uncertainty that seeps through the pages are by no means unique to her experience.

With its viscerally moving rendering of how the war shaped her understanding of the world, Satrapi’s “The Complete Persepolis” absolutely deserves its place as one of the most significant graphic novels of all time.

Kayla Chan is a Junior Reporter with Youth Journalism International.

Kayla Chan is a Junior Reporter with Youth Journalism International from Macau, China.