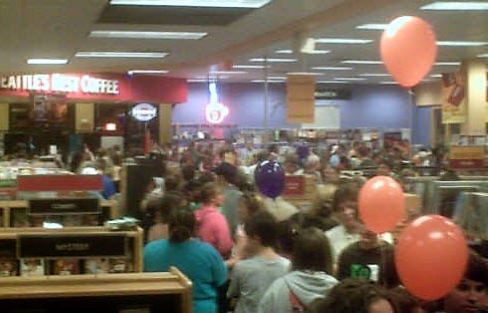 The scene at the Border's Bookstore in Simsbury, Conn. on the night of the release of the final volume in the Harry Potter series. (Bruno Werneck/YJI)

SIMSBURY, Connecticut, U.S.A. — The day is upon us.
July 21st, 2007 will surely be remembered by crazed fans of all ages as the day Harry Potter and the Deathly Hallows was released. It will be recorded in the annals of history as the day in which a young, awkwardly heroic boy captivated the minds and hearts of thousands.
Parties and gatherings were planned months in advance with the sole intent of celebrating the final book in the fantastically successful seven-part series.
At precisely 12:01 a.m. Saturday, thousands lined up at their local bookstores, anxiously awaiting their very own copy of the highly anticipated novel.
Many probably plopped down on their favorite couch with a mug of hot coffee and pulled an all-nighter.
Why all the commotion?
It’s true that a good book can move mountains and tumble walls, but to what extent does this statement apply to Harry Potter?
Can millions of fans really relate to the trials and tribulations of a teenage wizard? What makes Harry Potter such a fascinating and appealing character?
When the first book, Harry Potter and the Sorcerers Stone came out in late June of 1997, many of us remember running to the nearest library and frantically searching the shelves for the last copy. We were all very young, but there was something compelling and undeniable in those pages.
The universality of Harry Potter’s situation broke down age barriers and exposed a commonality that all humans share – fear.
Perhaps the strongest of emotions, fear and uncertainty, are what makes life so special and meaningful.
In Harry’s case, the insecurity he feels living with the Dursleys stems from the fact that he is not a muggle, but a pureblood wizard.
And due to his lineage and his abnormal connection to the world of magic (his scar), Harry can never feel complete in his present environment. This is why, when Hagrid arrives at his door in such an unlikely fashion, Harry feels strangely safe and not at all vulnerable.
Author J. K. Rowling excels in her use of tone and diction in the Harry Potter books. By using omniscient third-person voice, she can describe events with incredible detail as well as explain the simultaneous emotions of the characters.
This allows readers to experience what Harry and his friends are feeling and establish connections with them.
The fantastical nature of the Harry Potter novels adds to their appeal. At some point, everyone – whether they admit it or not – has fantasized about having certain powers or abilities.
It’s human nature, and it’s human nature to admire those who posses what you yearn for. I’ve wished dozens of times to be able to conjure up fire or become invisible.
Many teenagers my age grew up with Harry Potter.
His transition from timid boy to awkward teenager to learned man marks our evolution as well.
Harry’s made many mistakes in his years at Hogwarts, just as we’ve done in our high schools. Harry’s fallen in love, felt embarrassed, and experienced the glory of accomplishment – just like us.
Harry’s character inspires and interests us, and that is why his life story has been so magnificent.

Bruno Werneck is a Report for Youth Journalism International.