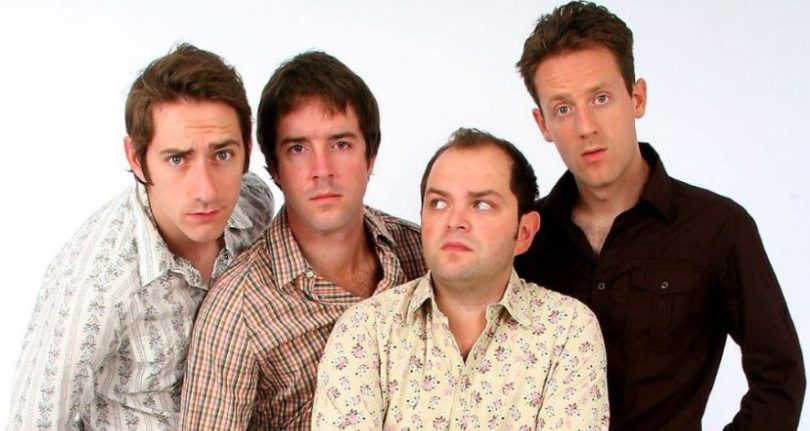 PLYMOUTH, Connecticut, U.S.A. — Ever since “Saturday Night Live” premiered on NBC in 1975, a host of other sketch comedy shows have been launched with mixed success. The most notable of these include Fox’s “Mad TV” and Canada’s “The Kids in the Hall.”
Comedy Central has introduced many of these sketch comedy rivals, including the short-lived “Ben Stiller Show” and the now very popular “Chappelle’s Show.” But Comedy Central is seeking to take the center stage of sketch comedy again, this time with its new series “The Hollow Men,” which premiered last month.
“The Hollow Men” themselves consist of David Armand, Nick Tanner, Rupert Russell, and Sam Spedding.
All four are English born and, despite what might be inferred by the occasional lowbrow humor of the show, are all professional actors and college grads of Cambridge, the University of London and the London Academy of Music and Dramatic Art. They are accomplished playwrights and occasional writers for such British newspapers as The Guardian and The Observer.
They’ve also worked as writers and actors on a number of different British TV and radio shows. It is only now that they are starting to have a major American audience with their own American television show.
The show’s setup echoes that of “Kids in the Hall” – some of the only obvious differences are the nationalities and the fact that there are only four of them, not five. Comedy Central’s website (www.comedycentral.com) itself bills “The Hollow Men” as being “In the tradition of ‘Monty Python’ and ‘The Kids in the Hall’” and as, “four guys who revel in the inappropriate, occasionally wear dresses and are redefining absurdity with their rapid-fire bits.”
After having seen the show, this seems to be a fairly accurate description. Every skit in the show – each lasting several minutes at most, 12 in all – involves lightening wit and completely unexpected circumstances.
The four may be at their high school reunion, reminiscing about the good old days. Problem is that no one seems to remember anyone’s name from such days (with the exception of the guy who had the reputation of being able to pee over 10 feet). Or they might be at a scientific convention where one of the esteemed colleagues giving a presentation has taken all of his grant money and spent it on a lavish vacation. The dialogue clips along at a brisk space, and wastes no time getting to the punchlines.
While the material is occasionally risqué in a truly unapologetic fashion, it does not, like “Mad TV” before it, go over the line in resorting to shock tactics to get a laugh. The humor is genuinely clever and most often takes the viewer completely by surprise.
“The Hollow Men” are also masters of irony and the twist ending. None of the jokes or punchlines are predictable, and the material is fresh in a way that keeps the audience’s attention.
A perfect example of this was a recent skit where three of the Hollow Men are in a space capsule revolving around the moon. By radio communication to Mission Control they manage to fake their own moon landing so that they can stay in their shuttle to drink beer and eat pizza.
All is going well until one of them slips and mentions that aliens have taken hold of their shuttle. NASA, not wanting to take any risks, aborts the mission and pushes a button that causes the capsule to self-destruct. An assistant then approaches the director of Mission Control (the fourth Hollow Man) and asks, “What are we going to tell the media?”
Very calmly and nonchalantly, the director replies, “We’ll just tell them they got lost. What the hell do I care?” At this point the camera zooms out to reveal that the 20 or so people at Mission Control are doing nothing more than drinking beer and eating pizza.
The gag hits hard and fast, and the amused audience barely knows what’s hit them.
“The Hollow Men” shows a lot of promise. With quick banter and uncertain conclusions, the sketches manage to entertain on every level, even though the nature of the jokes can sometimes be crude and unsettling. If they can keep their material fresh and consistently funny, they’ll certainly have a one-up over more recent episodes of sketch comedy superstar “Saturday Night Live.”
Fans of “The Kids In The Hall” and Monty Python (not to mention the likes of Dave Chappelle) are in for a treat in the form of “The Hollow Men.” Comedy Central’s website concludes by saying, “Tune in for nudist-powered car engines, chronic Marlon Brando impersonators, vag badgers and much, much more!”
For the record, you do not want to know what a “vag badger” is.