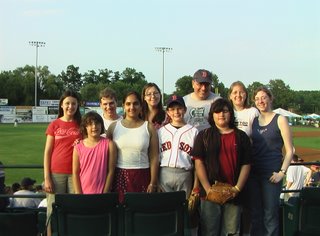 The Tattoo goes to the ballpark — Here’s the gang after the ceremony on the field. From left to right: Rachel, Mary, Teague, Hila, Amanda, Kiernan, Steve, Wesley, Jackie and Katie.

The New Britain Rock Cats, a AA minor league baseball team in Connecticut, honored The Tattoo tonight as one of its “Hometown Champions.” In practical terms, that means a bunch of us got to the game, stand on the field behind a big banner and smile as an announcer talked about The Tattoo to several thousand fans who mostly didn’t care.
Our son Kiernan got to throw out the first pitch for the game against the Fisher Cats of New Hampshire. He threw a perfect strike and was awfully pleased.
Pictures will follow, maybe, but here’s what the Rock Cats said while we stood there on the field:

Begun as a local group in Central Connecticut in 1994, The Tattoo, an online newspaper written by and for teenagers, has grown into an international organization with members from 15 different countries around the world, and 23 states in the U.S. Still based here in Connecticut, The Tattoo has readers from every country in the world.
The Tattoo is an all-volunteer organization led by founders Steve Collins and Jackie Majerus, with considerable help from alumni, including some of those here today. Some, though not all, who pass through The Tattoo emerge as professional writers. Tattoo alumni are writing for many different newspapers, including the Cape Cod Times. Other Tattoo graduates are pursuing careers in law, social work, teaching and medicine. All of them learned to be better writers and made lifelong friends from other cultures and from other countries through The Tattoo.
The Tattoo and its writers, cartoonists, photographers and advisors have won numerous awards from the Connecticut Society of Professional Journalists, the National Quill and Scroll Society and the Scholastic Press Forum for coverage of everything from hard-hitting news on teen suicide and school violence to heart-wrenching journals from a survivor of Hurricane Katrina to its stellar Insider’s Guide to High School, an annual collection of valuable back to school advice from the kids who’ve been there and done that. On the website, there are music, book and movie reviews and plenty of travel and journal writing to round out the offerings.
The Tattoo is free and open to any teenager anywhere in the world who is interested in journalism. Go to www.ReadTheTattoo.com to check out The Tattoo’s website or to contact the advisors.