TUCSON, Arizona, U.S.A. — From his U.S. Army post in “the center of chaos” in Iraq this spring, 26-year-old Jake Schmidt was stunned to learn of the school shooting back home in Red Lake, Minnesota.

Weise murdered nine people, including his grandfather, his grandfather’s girlfriend, five fellow students, a teacher and a school security guard before turning the gun on himself. He left 14 other students wounded.

“I’m used to seeing things like this on the news and seeing a school I don’t recognize behind the reporter,” said Schmidt.

Red Lake lies 30 miles north of Schmidt’s hometown of Bemidji and is located on the Red Lake Indian reservation which, Schmidt said, “is one of the poorest reservations in the country and hard times are aplenty.”

But Schmidt considers the Red Lake group of Chippewa Indians a proud people.

“Traditions and tribal pride play large roles in their everyday life,” he said.

Still, Schmidt said, the people on the reservation have a lot in common with the rest of the nation.

“The people of Red Lake seem like anyone else in America,” Schmidt said. “They wear what’s in style, ‘pimp out their rides’ and listen to popular music for the younger generation. You wouldn’t be able to see their heritage unless you live so close to them, as I have.”

According to Schmidt, the people of Bemidji and the Red Lake reservation are such close and compassionate neighbors that it’s hard to see much of a difference between them.

“So the shooting obviously comes as a major shock to everyone,” said Schmidt. 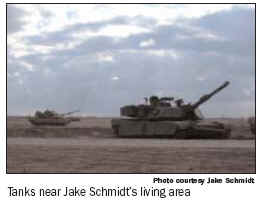 “Then there’s the irony of it all,” said Schmidt. “I’m in the most hostile region of this country and I haven’t seen a bloody incident for a few weeks, and then this happens 20 miles from my house in Minnesota.”

In a series of e-mail interviews from Iraq, Schmidt reflected on the bloody March 22 shooting spree at Red Lake High School where he occasionally had spent time with kids making dream catchers or playing lacrosse, which he said is popular in Red Lake.

“It’s not fair this happened while they were in an environment where they are to learn and feel safe and I’m in the center of chaos,” said Schmidt. “I can feel the ripple of shock and pain that my community and the proud Red Lake Nation are experiencing, even all the way over here.”

He described his hometown as a quiet, but rapidly growing community with big city amenities with the feel of a small town.

Although there are problems in town that need to be fixed, Schmidt said, “Bemidji is a wonderful area to raise a family.”

“You always think that ‘stuff like this doesn’t happen where I live,’” Schmidt wrote. “But unfortunately, it can happen anywhere, even in the small, beautiful community of Bemidji/Red Lake.”

Born and raised in Bemidji, Schmidt was a CNC technician before being deployed to Iraq for the second time in early January.

A specialist with the 22nd Signal Brigade, Schmidt works on military phone and computer networks.

For Schmidt, his current home base is in Kitzingen, Germany “is like a second home. I love the sights, people and of course, the beer.”

“And when I fail at any of those risks, which I have, I have been able to learn from those mistakes,” said Schmidt.

Life in the Army has given him travel opportunities, too, he said.

“I’ve been all over Europe, spending a weekend in the Austrian Alps or sleeping in a hotel a few blocks from the Eiffel Tower.”

But he added, “After joining the military, I have come to recognize and respect the need for one’s individuality, which the Army violently tries to rip away from you day after day.”

Returning home to Germany after his first stint in Iraq, Schmidt said he noticed things that he’d taken for granted in the past.

“Stuff like a cool, steady rain, or driving down the Autobahn at 150 mph with the windows rolled down in the Mustang, or just viewing Germany’s beautiful countryside from atop a large hill, listening to the sounds of nature seemed more significant because we missed it while in Iraq,” Schmidt said. “It’s hard for me to speculate how this will affect me in the long run, but I know that our family members do notice a change in us when we return.”

When he goes home to Germany on leave, Schmidt said he’d like to see more of Europe on his 30-day break, but he said he must also prepare to get out of the Army three months later.

His expected March 1 discharge date came and went while he was in Iraq, Schmidt wrote.

“I was stop-lost, which prevented me from getting out on time,” said Schmidt.

When he returns to Minnesota, Schmidt said he will go back to his old job and build his house, but won’t lose his ties to Europe.

“But I will never make Germany (or Europe) just a memory,” Schmidt wrote. “I will always go back to Germany.”

Alkhansa El-Bedawi is a Reporter for Youth Journalism International.