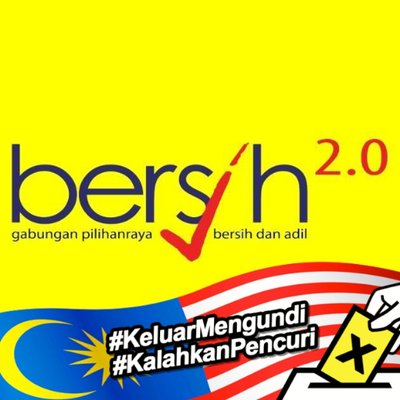 MELAKA, Malaysia – The thousands of Malaysians who turned up for this afternoon’s Bersih 2.0 rally are returning home now. They were gassed, chased and beaten by the police, and at least 1,400 of them were arrested.
Despite the police brutality against these people who were marching peacefully towards Stadium Merdeka, demonstrators showed the world what a beautiful spirit Malaysians have. Strangers from all walks of life, race, and religion linked arms with each other, sang the national anthem together and helped each other.

No one knows the actual number of people who attended the event. Some say it is 20,000 while others say it is 50,000. What we know is that more people would have turned up for the event if not for the police intimidation.
As I write this article, my Twitter timeline is filled with Bersih stories. Those who attended the event are telling how they faced the tear gas and chemical-laced water fired by the police, how people bought and gave free food to some of the marchers, and how strangers helped them find their way around the city center.
But many of the stories told of how proud these people were to be Malaysians. Lately, racism and religious problems has been flourishing in Malaysia.
But Bersih 2.0 united thousands of people from all races and religions towards a common goal – electoral reforms.
Many of the people who marched were injured due to police brutality. The cruelty of the police against innocent people will never be forgotten.
In one of the worst acts of police brutality, the police fired tear gas into the compound of Tung Shin Hospital. A group of marchers had sought refuge in the hospital compound. They had to climb out of the hospital to a school to escape the police.
We have lost all trust and faith in the police.
The government has lied to us and suppressed us. They are even lying to us the estimated number of people who marched in the rally!
Although Bersih 2.0 rally has ended, the fight for electoral reforms will go on. We have no choice because it is for our future and our children’s future.
As I write, pictures from Bersih rallies in Australia, New Zealand and London are being tweeted. Malaysians living in 30 cities around the world are expected to stage Bersih rallies. It is wonderful to know that we Malaysians on the home front are not the only ones fighting for electoral reforms.
Bersih 2.0 has shown me that there is still a glimmer of hope. My fellow Malaysians rose up and stared in the face of intimidation.
As long as we have the guts to ask the government for electoral reforms, not all is lost. There is hope.