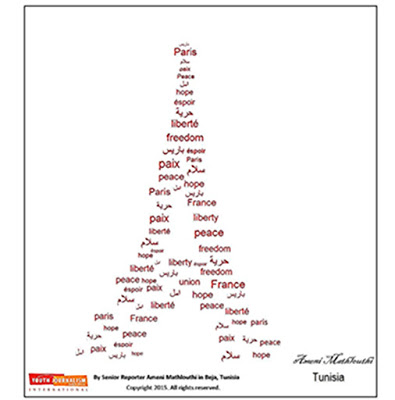 BEJA, Tunisia – Paris, the City of Light, is darkened and mournful.

When your heart is already shattered by the killing of a 15-year-old Tunisian shepherd by terrorists there, there isn’t much more to break when you learn about the attack on Paris that same day.

This lightning strike one dark evening on the City of Light claimed more than 120 lives. People died near a soccer stadium where a match between France and Germany was taking place.
The assault Friday, which included shootings and suicide bombings in several places, wasn’t far from the office of the Charlie Hebdo magazine that terrorists struck early this year.
As a result, French President François Hollande declared a state of emergency and ordered national borders closed.

What can nations do to prevent this kind of strike from happening?
When will the world be free from terrorism?
My fear now is this historic incursion will affect the Muslim community more than any other.
Just like after 9/11, the so-called “Islamist” attacks leave moral and physical damages that deeply affect Muslims, who are too often the subject of suspicion. They were at times treated more seriously at check points and common Arabic names, such as Jihad, could cause a person a lot of trouble. It might even be cause for choosing to live somewhere besides the U.S.  Some people feared bearded men, or women wearing a veil.
Thankfully misunderstandings got clarified in America but certainly it took time. Will we see the same scenario in Europe? Maybe not. The world is much smarter now and people can make a better distinction between Muslims and terrorists.
We can only watch and see how history unfolds.
Peace, سلام, paix.
Ameni Mathlouthi is a Senior Reporter for Youth Journalism International.
***
Your tax-deductible contribution can help support this nonprofit at
www.HelpYJI.org