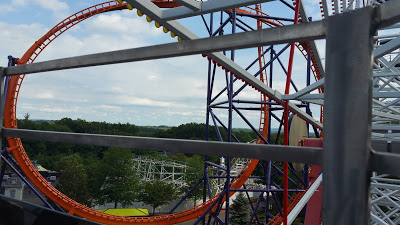 From the Ferris Wheel, riders can see the Wildcat historic wooden coaster and Phobia, the new steel ride at Lake Compounce. (Mary Majerus-Collins/YJI)
BRISTOL, Connecticut, U.S.A. – As a seasoned roller coaster junkie, I have a need for speed and a love for the stomach-flipping drops of the nation’s biggest and best coasters. A day at Lake Compounce satisfied my adrenaline craving for the summer, so for my fellow thrill seekers, here is a roller coaster guide for the nation’s oldest amusement park.
Wildcat: As the oldest roller coaster in the park, the 1927 Wildcat is a must for any coaster enthusiast. My advice is to ride it and then get some water to fend off the inevitable headache. The first drop is smooth and exciting, but I was distracted from the rest of the thrills by bone-rattling turns and head-banging bounces. The innovation and durability of Wildcat is a feat, but it can be an uncomfortable ride for a generation spoiled by steel coasters. Jerry Brick, the park’s general manager, explained that a bumpy ride is typical of the humid summer months due to expanding wooden tracks. While Lake Compounce hoses down the coaster in attempts to cool it off, one ride on the Wildcat is all I can handle this season. A painful but respectful nod to the nearly 90 year old attraction.

Boulder Dash: Long hailed as the best wooden roller coaster in the world, Boulder Dash is a rite of passage. The hillside ride takes thrill seekers through the woods and trees that hide the upcoming drops, enhancing the stomach-flipping effects. The coaster’s many crests don’t disappoint, but on more than a few turns and speedy straightaways I felt my organs shift. Brick explained that due to the weather the ride is 15 seconds faster this August, topping 60 mph, than it was in May. Don’t get me wrong, I have a need for speed, but I would take a smooth ride over a brain-scrambler any day.
Zoomerang: Maybe I was smaller the last time I rode it. Maybe I hadn’t yet taken so many rickety budget flights across Europe. Or maybe I was spoiled after riding the new Phobia Phear Coaster. Zoomerang was short, slow, and more painful than a steel coaster should be. Also the fact that it goes both forward and backward makes choosing a seat difficult. We went for the
back, agreeing that it was worth it to experience the high speeds going forward while going backward would be enough of a thrill itself, even if we were stuck in the boring and slow front car. Though I felt more stable overall than on the Wildcat and Boulder Dash, Zoomerang’s rock hard seat dug into my back. I would have gladly accepted this exchange if the coaster had been as thrilling as the others, but I didn’t have a single stomach flip. Not one. I would have been remiss if I had not gone on it, but on busy days, I suggest spending your valuable time waiting in line for Boulder Dash and Phobia instead. However, Zoomerang would be a good intro for youngsters just breaking into the roller coaster game.
Phobia: This summer Lake Compounce unveiled its Phobia Phear  Coaster, hailed as the first of its kind in the northeast. The ride is a 15-story loop that reaches 65 mph during its three stomach-flipping drops. As I approached (read: ran excitedly to) the ride, the first one of the day, signs and voice recordings warned that I would soon face my biggest “phear.” Without
the help of Scarecrow’s Fear Toxin from the Batman series, I wasn’t sure how the ride would achieve this. I managed to snag the last seat in the car, knowing that the back car is always the fastest. As I strapped myself in, I had a massive grin waiting for my first roller coaster ride in more than a year. My grin faded as the harnesses locked down and the shin guards dug into my legs. The ride harnesses don’t seem well suited to taller riders, but I was happy to be strapped in during the ride’s slower corkscrew before the big plunge. While it didn’t play on my biggest “phears,” Phobia was thrilling, smooth and a worthwhile investment. I would rank it as the park’s best ride: low impact, low pain and high thrills.
Shelby Saunders is a Junior Reporter for Youth Journalism International.

If thrill rides aren’t your thing, try: “How to have fun at the amusement park, even if you don’t like rollercoasters,” by YJI Senior Correspondent Kiernan Majerus-Collins.

***
You know what’s really a thrill? Making a difference in young lives. That’s what happens when you make a donation to Youth Journalism
International. Thanks for coming along for the ride!
HelpYJI.org