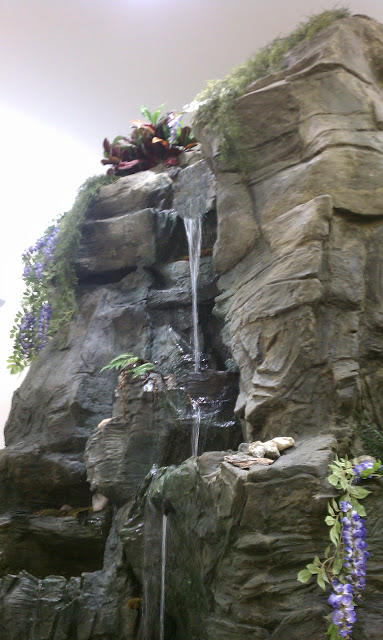 By Jason Soltys
Junior Reporter
Youth Journalism International
BRISTOL, Conn., U.S.A. – There aren’t
many places that have waterfalls indoors, but Indian Rock Nature Preserve is
one of them.
At the nature preserve,
which is part of the Environmental Learning Centers of Connecticut, Executive
Director Jon Guglietta wanted the entry area – called the Great Hall – to feel like
people hadn’t left nature behind when they walked in the door.
The centerpiece is a
large waterfall created by Massachusetts exhibit company 42 Design Fab Studio.

“It’s really hard to
find companies that have experience building waterfalls,” said Guglietta.
Construction started in
the beginning of September 2011 and finished in that same month, he said.
This waterfall was not
only a way to bring nature indoors, but to hide an elevator shaft that was in
the middle of the room.
This waterfall has five
places for the water to come out, which regulates the flow so that the water
doesn’t splash all over the place.
Also, as strange as
this may seem, even the sound of the waterfall can be adjusted.
Crevices in the “rock,”
really made out of fiberglass, create series of v-notches so that the water
streams can be controlled.
The notches can be
altered to change the way that the water falls by using modeling clay to fill
in crevices or create them.
The waterfall has a
pump to keep the water swirling, kind of like a very weak whirlpool, so that
all of the water is always moving and algae doesn’t grow.
This livable aquarium,
which is currently holding two painted turtles, is large enough to hold half a
dozen turtles – and made so that turtles would not be able to crawl out.
There are real shiner
fish in the pools, providing food for the turtles.
Along the rock, there
are real pincushion and sphagnum mosses growing along with ferns.
At the very top of the
waterfall, there are several artificial plants to give the feel of being in a natural
environment.
The 150 gallons of
water is always being recycled and if any evaporates, more water is added.
The waterfall has seats
built into the rocks along the edges so that visitors can sit. It came in six
different sections and was assembled at the Indian Rock Nature Preserve.
In addition to the
waterfall, there is room for other nature-themed exhibits.
The new floor in the
Great Hall, made up of Idaho Quartzite, is made to look like Connecticut’s
natural bedrock, which is Mica Schist.
Volunteers, led by
master mason Tony Paulo, saved Indian Rock about $30,000 in installation costs,
spending about six weeks putting the new floor down.
Small trees and plants
add to the natural environment in the Great Hall, and Guglietta said three more
large trees will be added.
“We want this to be a
nature state,” said Guglietta.
Giant windows let in
natural light and offer a nice view of the surrounding woods. Guglietta also
wants to put clouds on the ceiling and murals on the wall to make the hall feel
even more like a natural environment.