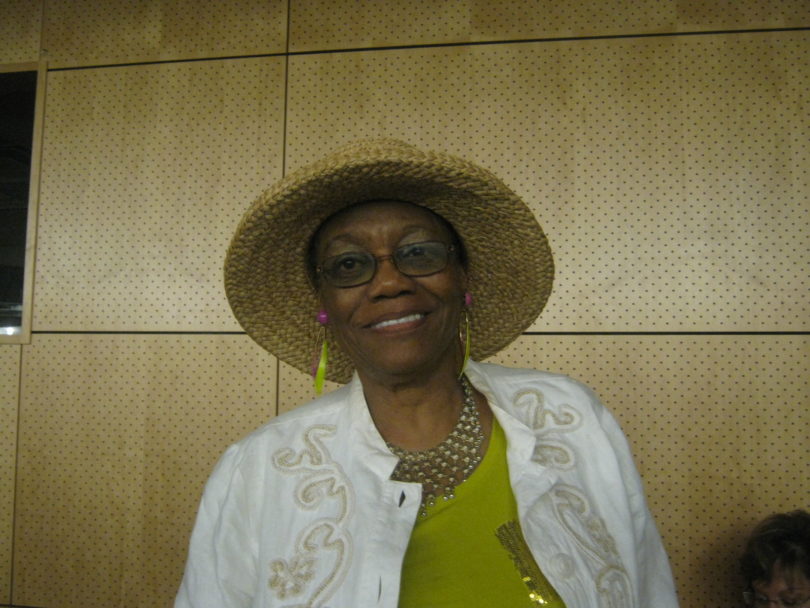 Carol Tillman Parrish, a survivor of the July 6, 1944 Hartford Circus Fire. (Yelena Samofalova/YJI)
HARTFORD, Connecticut, U.S.A. – After 70 years, the horrors of the Hartford Circus Fire are still vivid for survivors who escaped the burning Big Top as children.
“It was chaos,” said Carol Tillman Parrish, who went to the circus with the Arsenal School summer camp when she was just six years old.
As Parrish watched from the bleachers, she saw a woman on a high wire on a bicycle. Then she saw a ball of fire as it “zoomed up” the tent and hit the woman on the
bicycle, catching the performer’s hair on fire.
She and a friend jumped down from the stands and escaped by crawling under a tent wall that someone held up for them, Parrish said.
Others were not as fortunate.
Parrish remembers people screaming and trampling each other.
“Until this day, I can smell the stench of human flesh,” said Parrish.
The July 6, 1944 Hartford Circus Fire claimed 168 lives, many of them children who went to see the Ringling Brothers, Barnum and Bailey Circus. It is the largest circus tragedy in American history.
Parrish, who still lives in Hartford, joined other survivors who shared their stories on the 70th anniversary of the tragedy at a special commemorative event held by The Mark Twain House & Museum and the Harriet Beecher Stowe Center. 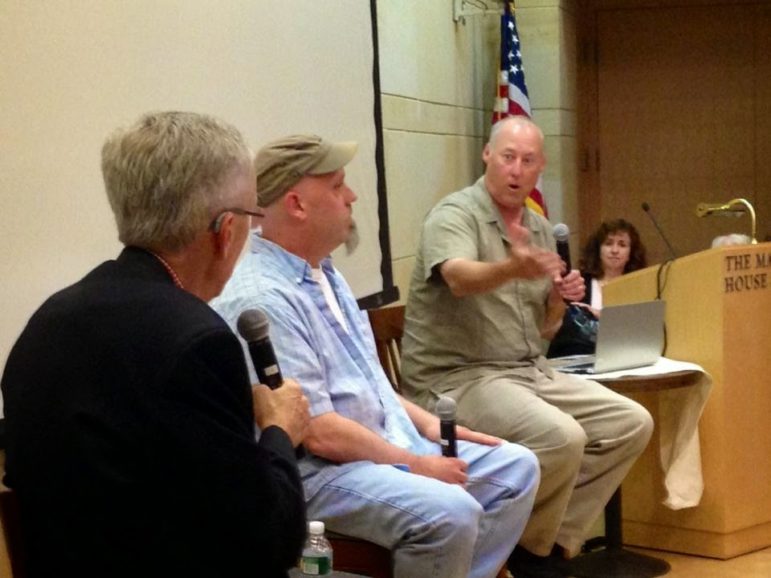 Author Stewart O’Nan, who wrote the 2001 book The Circus Fire: A True Story of an American Tragedy, and Mike Skidgell, whose new book, The Hartford Circus Fire, spoke to a standing room only crowd of more than 200 Sunday afternoon.

The stories of that steamy summer day are horrifying.
With the Big Top filled with people, animals and performers and the afternoon matinee underway, a fire started at one end of the massive tent and spread rapidly.
Moderator Tom Condon, a longtime Hartford Courant journalist, said the tent’s waterproofing system – soaking the canvas in
gasoline and coating it with wax – made sure “it would go off like a match head.”
When they realized the tent was on fire, people frantically tried to leave. Chutes set up to bring animals in and out of the rings made it difficult to reach some of the exits. Most people got out, but many died, trapped under the collapsed, burning tent.
O’Nan told of a boy buried at the bottom of a pile of bodies near an exit gate. The child heard the people on top of him burning to death, O’Nan said, and then nearly drowned when firefighters poured water on the pile. Though trapped below, unable to move, he was pulled out after yelling for help.
Survivors at the event recounted moments, sounds, smells and images that continue to haunt them. One who said she heard sirens all night after the fire, said she can’t hear an ambulance without breaking into a cold sweat.
They spoke of surviving because of the kindness of strangers who helped them escape by carrying them to safety or cutting the tent wall to create a way out.
Several said they’ve never been to a circus since and never will again.
O’Nan said he initially became interested in the fire when he was doing research for a novel set in 1943 and came across a photo of clown Emmett Kelly crying. He’d never heard of the Hartford circus fire before.
He started asking around.
“Everybody had a story,” said O’Nan. “It was just a terrible, terrible thing. The more I dug, the more fascinating it was.”
There wasn’t a book on the circus fire, O’Nan said, other than a little academic work that detailed the settlement. 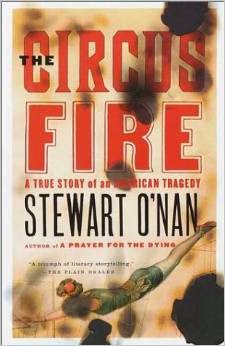 O’Nan read journalist Lynne Tuohy’s riveting stories on the fire in the Hartford Courant. Her work was “groundbreaking,” O’Nan said, because she got survivors to talk about it.
O’Nan said he went to Tuohy and urged her to write a book about it, but she told him she couldn’t because her children were young and the stories of the victims were too much to bear.
That meant he was “stuck writing the book,” said O’Nan.
O’Nan’s book examines how people reacted to the emergency. Some, he said, jumped from the bleachers, while others pushed toward the exits. He said some of the people actually ran toward the fire.
Even though the tent had many exits, people instinctively ran for the one they knew, O’Nan said, which for many of them, was exactly where the fire was.
Still others hesitated, waiting in their seats to see what would happen, almost as if they didn’t believe the fire was real. For some, those moments cost them their lives, according to O’Nan.
Browsing through a newspaper from the day his father was born – July 8, 1944, two days after the fire – Skidgell noticed all the obituaries of the victims. He wanted to learn more and began collecting biographies of victims and personal stories at www.circusfire1944.com, a website he made on the history of the fire.
He learned, Skidgell said, that the circus band, alerted to the fire, began playing the “Disaster March,” a signal to the rest of the performers and circus workers that they needed to act quickly. In this case, the “Disaster March” was “The Stars and Stripes Forever.”
Even after all these years, mysteries remain.
O’Nan said no one knows exactly how the fire started.
“It does seem to have started in the men’s restroom,” O’Nan said.
And there are still unidentified victims and people who were never found, six of each.
“They don’t match up,” said Skidgell.
O’Nan said it’s likely the burned remains of victims were misidentified. One family took home what they believed was the body of their child, he said, but returned it later after realizing it wasn’t.
Parrish said she knew many who lost their lives in the fire. In 1944, she said, there wasn’t much help for survivors of such a traumatic event.
Her doctor’s advice to her parents, Parrish said, was to let her “cry it out.”
Tom Vaughn, Yelena Samofalova and Mary Majerus-Collins are Reporters for Youth Journalism International.