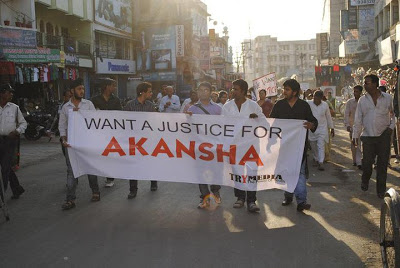 By Roohani Deshpande
Junior Reporter
Youth Journalism International
JABALPUR, Madhya Pradesh, India – Young people are angry and scared after a group of boys attacked an Indian girl and her family, killing her brother and grandmother and leaving the girl critically injured.
Seventeen-year-old Akanksha Usrathe, an 11th grade student of Maharshi Vidya Mandir School, was harassed last month while returning from her coaching institute by a group of school boys.
She strongly protested, and the enraged boys allegedly barged into her house, violently beat her, her 13-year-old brother Priyanshu Usrathe and her grandmother, Smt Sushila Devi, with a clothes iron, according to news reports at the time.
The parents weren’t home during the March 4 attack, which sent all three victims to the hospital. The boy and grandmother died, and the girl suffered major head injuries.
“She was such a sweet natured girl, not the type to get into fights. This is a terrible incident and we are all shocked,” said Nidhi Anil Kumar, a 17-year-old coaching mate from Christ Church Girls School who was deeply distressed about what happened to her friend.
After receiving a large number of stitches on her head, Akanksha Usrathe has emerged from the coma and is back home. Her parents are struggling to bear the loss.
The incident evoked a mixture of outrage and fear among teens in the small city of Jabalpur. While some are fuming about such a disgraceful event taking place in their hometown, others are afraid that they or their families might face a similar fate.
Youth of Jabalpur did what they could to raise awareness of the issue through the social networking site Facebook and took part in a candlelight march that was organized by political opposition leader Vinay Saxena.
Saxena’s march protested what organizers said was a lack of law and order in the city. He declined comment, and referred to his Facebook status message.
“The unity expressed by the people of Jabalpur for justice through the candle march was wonderful, but the reaction of police against it was painful. We shall continue to fight for truth and non-violence till we become successful,” Saxena wrote on his Facebook page.
Many people expressed strong contempt for the police.
“The first thing which came to my mind is the Western culture overpowering the teens of India, and the second thing is zero tolerance,” said a visibly outraged Aarushi Kumar, 17. “Such an incident has only shown us what the next generation’s mentality is. The police is under the thumb of illiterate representatives of our society. How will the nation develop?”
Close friends of the victims are deeply disturbed by the crime and disappointed that suspects remain free.
Justice has been denied, according to Nidhi Anil Kumar.
“Even after the candle march was organized, the case is still pending and nobody has been caught,” said Nidhi Anil Kumar.
The police suspect four boys who attended the same coaching center as Akanksha Usrathe, but the status of the investigation remains unclear.