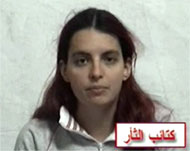 In a video aired on Aljazeera today, the captors of American reporter Jill Carroll threatened to kill her in 72 hours if all the women prisoners held in Iraq by the United States are not freed — something that clearly won’t happen.

It appears that about half the time has already passed.

News organizations from across the world, including the Jordan Times and Aljazeera itself, have pleaded for Carroll’s release and reporter groups are pushing hard as well. We can only hope they succeed.