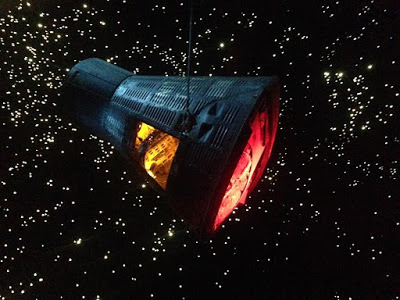 Astronaut John Glenn, who died Dec. 7 at age 95, made history as the first American to orbit the Earth aboard the Mercury 7, similar to this ship on display at the Space Center museum in Houston, Texas. (Mugdha Gurram/YJI)

COSHOCTON, Ohio, U.S.A. – It is hard to see history occurring when it happens in our lifetime.

Astronaut John Glenn’s work in space has already been written in the history books, but it wasn’t until Thursday that he has actually fully entered history through death.

Although I often revere the men of history, Glenn, a former United States senator from Ohio, seemed real to me mainly because he was born in a town only 40 minutes from where I live.
His adventures into space captivated me as a child and motivated me to study outer space as I grew up.
Unfortunately, I never knew this man personally, but his influence on me through his actions drastically changed my
life.
Noah Adelsberger is a Junior Reporter for Youth Journalism International.
***
You can help young people explore far beyond the world they know
with your tax-deductible contribution to this non-profit.
Thank you for your generous support.
HelpYJI.org