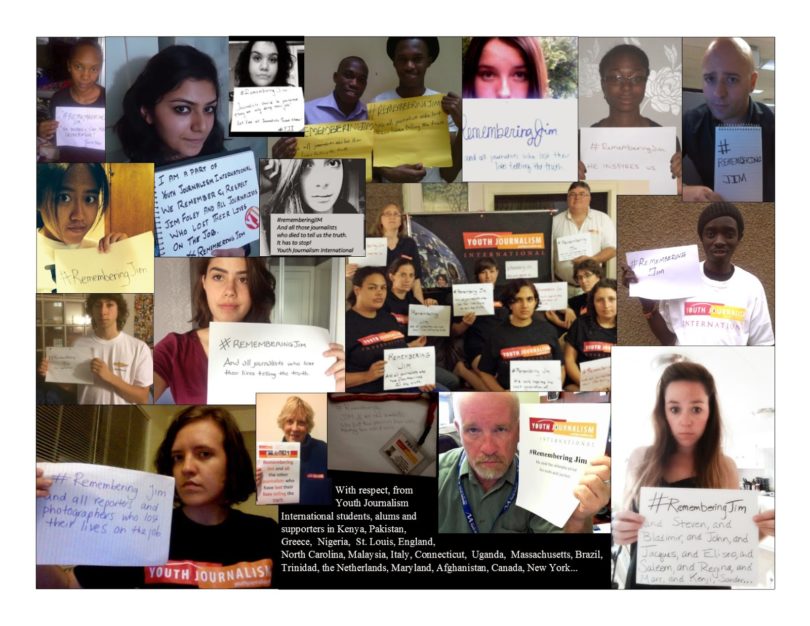 We post this photo today in memory of James Foley, a gifted and brave American journalist who was brutally murdered last month by ISIS terrorists. Foley had been working in Syria in November 2012 when he was abducted. We want his family, friends and colleagues to know that his life inspires us at Youth Journalism International, which helps students worldwide, including in the most troubled places, to tell their stories.The day the world learned the horrifying news of Foley’s death, YJI Senior Reporter Eli Winter wrote this tribute.
Foley’s commitment to telling the truth in the most difficult circumstances inspires us. YJI students, alumni and supporters from around the world made the photos used to put this collage together in Jim’s memory. Because they are not identified in the photo and some of their signs are hard to read, we’ll introduce them here.
All but one of the people in the top row are students. Starting at the top left is Joslyne Muthoni from Nairobi, Kenya, whose sign says, “He inspires the next generation.”
Next is Arooj Khalid from Lahore, Pakistan, whose sign reads, “I am a part of Youth Journalism International. We remember and respect Jim Foley and all journalists who lost their lives on the job.”
Then comes Eleni Grigovits from Athens, Greece, whose sign says, “Journalists should be protected. They are only doing their job. Let’s free all journalists. Save them!”
Linus Okechukwu and Festus Iyorah, from Nsukka, Nigeria, and then Sydney Hallett of St. Louis, Missouri, are all holding #Remembering Jim sign that also read “and all journalists who lost their lives telling the truth.”
Next to Sydney is Lauren Pope from Birmingham, England, whose sign says, “He inspires us,” and finally, YJI alum Joe Killian of Greensboro, North Carolina.
In the second row is student Evangeline Han from Melaka, Malaysia, then alum Eugenia Durante from Genoa, Italy, whose #RememberingJim sign also says, “And all those journalists who died to tell us the truth. It has to stop!”
In the third row are student Matt Albrecht from Amherst, Massachusetts, whose sign says, “He inspires us.”
Next is Maria Luiza Lago of Curitiba, Brazil, whose #RememberingJim sign also says “and all journalists who lost their lives telling the truth.”
The group photo in the center shows Youth Journalism International co-founders Jackie Majerus and Steve Collins of Connecticut in the back, YJI Ambassador Laura Spero and students Yelena Samofalova and Mary Majerus-Collins, all of Connecticut, in the center, and in front, YJI alums Katherine Agard from Trinidad and Hila Yosafi-Lehman from Connecticut and YJI student Olivia Kalsner Kershen of Connecticut.
On the right is Gilbert Bwette, an alum from Kampala, Uganda.
On the bottom row are alum Cara Nelissen from the Netherlands whose #RememberingJim sign also says, “and all reporters and photographers who lost their lives on the job.”
Board member Lynn Abrahamson of Maryland holds a sign that says, “Remembering Jim and all the other journalists who have lost their lives telling the truth.”
Edrees Kakar, an alum and board member from Kabul, Afghanistan, sent the photo of his YJI press pass with the sign, “#RememberingJim and all other journalists who lost their precious lives while reporting from conflict zones.”
YJI Ambassador Jeff Ducharme of Newfoundland, Canada holds a #RememberingJim sign that also says, “He paid the ultimate price for truth and justice.”
Finally, board member and alum Jennifer Rajotte of Tarrytown, New York, holds a #RememberingJim sign that also says, “and Steven, and Bladimir, and John, and Jacques, and Eliseo, and Saleem, and Regina, and Marc, and Kenji, Sander…”
***
Your tax-deductible contribution can help support this nonprofit at
www.HelpYJI.org