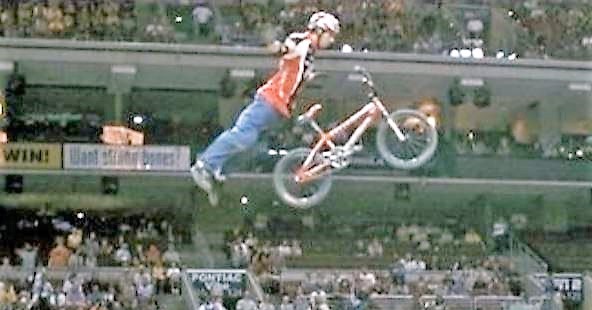 BRISTOL, Connecticut, U.S.A. — You’ve probably heard of Tony Hawk, Stephan Murray, Bob Burnquist and so on – the world’s best skaters, BMX riders and dirt-bike dudes.
But you haven’t seen them close-up and in action on the IMAX screen.
‘Ultimate X,’ the IMAX movie of the X Games comes screeching into theaters on Friday, May 10.
If you wanna see these hot, ass-kicking skaters, BMX and dirt-bikers in action, then you have to see this movie.
With one glance at the screen, you are in a totally different place.
Awesome wipe-outs are really close up – and the large screen and terrific speakers make it sound like you are right there and it is happening in front of you.
With IMAX, you get a whole different perspective at the movies. You aren’t just seeing the people skate, bike or ride, it’s like you are the athlete, or someone in his path.
Beyond these hot skaters, you learn a little about ESPN’s X Games and the pros themselves.
The X Games began in the mid-1990s and some people said they were “terrible.”
On particularly strange sport called “shovel racing” had competitors basically just racing downhill on shovels.
Another odd sport featured bungee jumping. Not very exciting, huh?
But as the years went on, the X Games got better because they began to understand more about good competition and all.
‘Ultimate X’ also teaches viewers about the pros themselves.
Tony Hawk, a world famous skateboarder, turned professional at 14 years old.
Carey Hart, a pro-dirt-biker, was the first person to attempt the back flip — and succeeded.
In the movie, he said that he had attempted this many times and wiped out, when he finally succeeded, the crowd roared with pleasure.
But overall, all those wipe outs and hot dudes all come together into this awesome, close-up, lifelike IMAX flick that you’ll love even if you don’t like extreme sports.

Danielle Letourneau is a Reporter for Youth Journalism International.