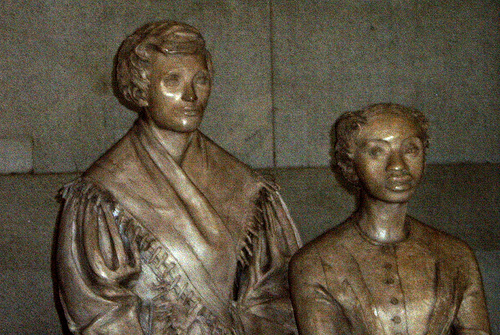 The new statue of 19th Century schoolteacher Prudence Crandall and a student inside the Connecticut State Capitol building. (Mary Majerus-Collins/YJI)

HARTFORD, Conn., U.S.A. – Almost everyone has heard of the great artists of the past, but lots of people are oblivious to the artists of the present. One of these great artists is a sculptor by the name of Gabriel Koren.
Koren, who is from Budapest, Hungary, studied at the Hungarian Academy of Fine Art. She traveled to America 30 years ago because she wanted to live in a big city and meet people from other cultures.
Her studio is now in Brooklyn, New York.
Koren only sculpts; she does not draw or paint.
One of Koren’s most recent works is the statue of Prudence Crandall in Connecticut’s state capitol building. It will soon be unveiled.
Another of Koren’s masterpieces is a statue of abolitionist Fredrick Douglas in Central Park in New York City. It will be placed on the corner of 110th Street and Frederick Douglas Boulevard and unveiled near the end of the year, she said.
Another sculpture by Koren is of the African-American leader, Malcolm X. It is in the Audubon Ballroom in Harlem, New York.
The Crandall sculpture is a hollow bronze statue that weighs about 500 pounds, according to Koren.
Like her other sculptures, the statue of Crandall is life-sized and is only a few inches off the floor because, as Koren said, “If it is on your level, you can identify with the sculpture.”

Mary Majerus-Collins is a Junior Reporter for Youth Journalism International.